On "Room 13," braving the paper-thin walls, and the sin that echoes throughout the hallway in the dead of night, singer-songwriter Jesse Malin—with a little help from Lucinda Williams—"Spent some time in a hotel room/Thinking about love." With former Lonely Astronaut/one-man band Joseph Arthur...

Striding away from the ill-lit gloom, walking the "Straight Line" again, post-punk/shoegazers Early Black sing of love, life and murder. At Sky Bar. With Soda Sun and Andrew Gardner...

Desert Dweller After Show—with Get A Grip, Plague Years, Lead Dream, Skin Ticket and others—takes place at The Dive Bar...

An afternoon of storytelling and darkly beautiful music is on the menu when For Love or Absinthe perform at The Madhatter's Tea Party. At Monterey Court...

Later, force of nature vocalist/instrumentalist Connie Brannock celebrates her 64th birthday with her crew. The Little House of Funk are throwing a dance party. At Monterey Court...

Folding together three-part harmonies with Americana and rock, The End of America tell tales of dystopia and other things. At Club Congress. With award-winning alt-folk duo Ryanhood...

"For those about to rock/We salute you." The Jack: The ultimate tribute to AC-DC perform at Nam to Sand Jam 2019. At the Reid Park Bandshell...

In the weeks following the release of Promised Land—a three song EP recorded in an old converted barn/recording studio in the Catskills with acclaimed producer Simone Felice—this Phoenix folk band was streamed over a quarter million times on Spotify and then was licensed for overhead play in Starbucks nationwide. The Senators bring their winning formula to Exo Bar. Rebekah Rolland is first up at the mic...

Alterna2 http://www.alterna2.com - Atreyu @ Razz2
Two decades after these SoCal metalcore mavericks first left their imprint, drummer Brandon Saller says their latest, In Our Wake (Spinefarm Records, 2018, "is the record that people will remember our band by. We've loved each other. And we've wanted to kill each other. Somehow, 20 years later, I feel like we've never been more on fire than we are now." Atreyu roll The 20 Year Anniversary Tour into the Rialto Theatre. Whitechapel, He Is Legend, Tempting Fate and Santa Cruz bring party favors...

Utilizing instruments he has designed, musician/instrument builder Nick Demopoulos has performed his unique interactive computer music at Lincoln Center, and has been featured on the Discovery Science Network. Smomid is at Solar Culture Gallery...

The Sofia Rankin Trio, John Hisey, The Turnouts and The County Line will perform at First Responders Music Fest: A benefit for Southern Arizona Disabled Firefighters. On the Hotel Congress plaza...

Four stages of live music, food trucks and fun for all. Yes, it's Porch Fest. In the Garden District...

Mattea will perform at The 2nd Annual Electric Witch Workshop. This year's workshop will focus on music production, sound engineering and "The Theater of the Mind" (radio). At Xerocraft...

All Bets Are On, Volume 35: On Mitt Romney's NCAA Ultimatum, Arizona's Clash With USC and More 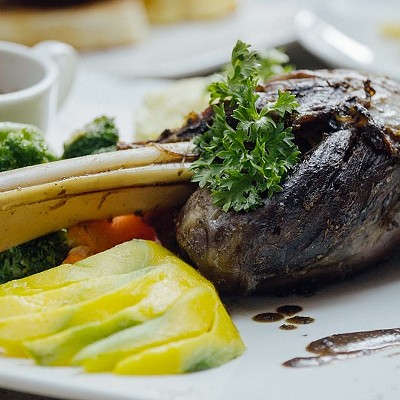