Referencing Incubus and the Red Hot Chili Peppers as heroes, these alt-rockers released their 2013 major label debut EP Love Songs Drug Songs. Earlier this summer, the band released "Optimistic," a stand-alone single that speaks out against endemic gun violence in the United  States. Now, out on the road to promoting Orion (Interscope, 2019) X Ambassadors make a stop at the Rialto Theatre. Flanked by indie rockers Bear Hands and LPX.

Performing as part of Plaza Live! Tuesday Night Concert Series, like a summer monsoon, English bluesman Tom Walbank will leave you shaking your head in bewilderment wondering what just hit you. At St. Philip's Plaza.

"And you will know us by the trail of maple syrup." Alt/garage rockers Banana Pancakes intrepidly declare that "Charlie Sheen is a Punk Rocker." At Club Congress. Flanked by Droll and Crashing Saturn. 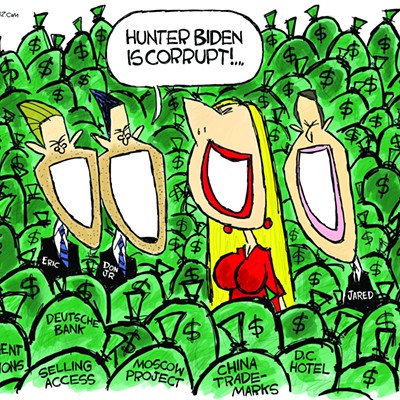 Claytoon of the Day: Kurds Get Trumped