Arts and Culture Do This! Fun in General LGBT 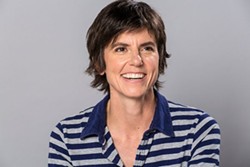 tignation.com
Tig Notaro could be your tough choice for October 12.
Laughing Stock won't be here next week, so here are two weeks’ worth of laughs for you. Also, clear your calendar for Oct. 18, because it’s going to be like Oct. 12 all over again.

You have tough choices for Saturday, October 12. At 8 p.m., Tig Notaro performs an all-ages show at the Rialto Theatre. Tickets are $30 o $42 at Eventbrite.com. Her CD, Live, was the number one selling comedy album the year it was released. A cancer survivor, she’s been nominated for an Emmy and a Grammy for her HBO special, Boyish Girl Interrupted, and her memoir was a New York Times Best-seller.

You can test your stamina with 24 hours of comedy at TENWEST’s 86,400 Second Tucson Comedy Marathon from 6 p.m., Saturday, Oct. 12 until 6 p.m., Sunday, Oct. 13 at Hotel McCoy. Produced by the Tucson Comedy Alliance, it’s free, live and live streamed on Facebook at tucsoncomedy.com. Bring the kids for six hours of family comedy from 6 a.m. to noon on Sunday, Oct. 13. Watch for more details in Tucson Weekly’s coverage of TENWEST.

Finally, Tucson expat and current New York City comic Lorrie Brownstone features for headliner Jason Cheny at Laffs Comedy Caffe at 8 and 10:30 p.m., Friday and Saturday, October 11 and 12. Tickets are $12.50 and $17.50 via laffstucson.com.

If there weren’t already a word combining boobs and laughs, rascally cartoonist, satirist and raconteur David Fitzsimmons would have to invent one. His annual Titters comedy show, featuring an all-female lineup, has a serious heart, though. It benefits Making Strides Against Breast Cancer, a program that funds breast cancer research. Fitzsimmons lost both his mother and sister to breast cancer. Two of the show’s comedians are survivors.

While we all know about those fancy anniversaries in double digits – gold, silver, maybe crystal — leave it to those randy Estrogen Hour girls, at least the straight ones, to celebrate the wood for their fifth anniversary. In its five years, the show has raised more than $40,000 for the Leukemia and Lymphoma Society.

The lineup has not yet been confirmed, but The Estrogen Hour typically features female comedians, including a few comedy “virgins” and, occasionally a “guestosterone.” Follow The Estrogen Hour on Facebook for updates.

Monday, Oct. 7 and 14: Free Open Mic at 7 p.m. at The Surly Wench. Oct. 14: Free improvised standup show with audience participation at The Switch at 9 p.m. at The Hut.