Any Arizonan with a head and a heart remembers the horrific 2011 shooting at a Gabby Giffords "Congress on your corner" event and knows Mark Kelly, who is running for Senate, is Giffords' husband. Ol' Chemtrail Kelli apparently has neither head nor heart. She certainly has no reservations about using gun violence imagery in a fundraising email as a way of rallying the troops voters in the battle against the Democratic enemy, Mark Kelly.

But in Ward's defense, she didn't invent the idea of "targeting" Democrats with gun-laced appeals for money and votes. It's a longstanding Republican family tradition.

Sarah Palin's SARAHPAC posted a graphic in 2010 stating, "20 House Democrats from districts we carried in 2008 voted for the health care bill. IT'S TIME TO TAKE A STAND." Each district is marked with a gunsight's crosshairs.

After the Giffords shooting, Palin was criticized for the graphic. She tried to turn the blame back onto Democrats, claiming she was the victim of a "blood libel," a term that refers to the antisemitic myth during the Middle Ages that Jews killed Christian children and used their blood for ceremonial purposes. Palin's mind-bogglingly stupid and insensitive misuse of the term, compounded with her clownish campaign for vice president, assured the Republican party that absurdities can pay political dividends. Hail to the current Nonsequitur-In-Chief.

A "No Satirist Could Top the Real Thing" Note: In Sarah Palin's 2015 book, "Sweet Freedom: A Devotional," she has a chapter titled, LOCKED AND LOADED FOR BATTLE. After a biblical quote about facing adversity, she writes,


The Bible promises trials for followers of Christ, so we’re wise to prepare for battle now. A soldier doesn’t begin his training after he’s called into battle; he’s been sacrificing and preparing for months and years before his boots hit the battlefield. So, how do we put on our armor for a spiritual battle? By studying and memorizing God’s Word. It forms a protective shield over our souls, warding off enemy attacks.

Palin wasn't alone in using gun imagery to target Democrats. Giffords' 2010 Republican opponent, Jesse Kelly, held a "Shoot a fully automatic M16 with Jesse Kelly" event to get his supporters pumped up and ready for campaign action. The listing for the event on the Pima County GOP website reads,

"Get on Target for Victory in November Help remove Gabrielle Giffords from office Shoot a fully automatic M16 with Jesse Kelly."

The announcement may be punctuation free, but its overall message of targeting, removing Giffords and shooting an M16 couldn't read more clearly.

Not being a gun person, I had to look it up. The M16 is a weapon similar to the AK-47, the weapon of choice for today's mass shooters.

Jesse Kelly's gun prowess loomed large in his campaign. He wanted supporters to picture him as a warrior, assault rifle in hand and ready for combat. 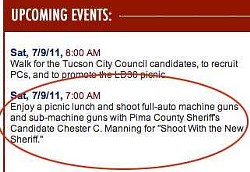 Later in 2011, almost 6 months to the day after the horrific Giffords shooting, another Pima County GOP candidate invited his supporters to "Enjoy a picnic lunch and shoot full-auto machine guns and sub-machine guns." The event for Pima County Sheriff candidate Chester C. Manning, publicized on the local GOP website, was titled, "Shoot With the New Sheriff."

Jared Lee Loughner, the deranged killer at the Giffords event, chose a Glock for the carnage he created, not one of the assault-style weapons featured in the Jesse Kelly and Chester Manning events. Which makes it all the more astonishing that in September 2011, the Pima County GOP chose to raffle off a Glock handgun to "HELP PIMA GOP GET OUT THE VOTE."

Some Pima County Republicans like Brian Miller, the previous chair of the county GOP, did not approve of the raffle. However, he admitted he raffled off a weapon during his 2010 primary run, but it somehow no longer seemed like the right thing to do after the Giffords shooting.

Kelli Ward's fundraising email asking supporters to "stop gun-grabber Mark Kelly dead in his tracks" is just another notch in Republicans' gun-themed rhetorical weaponry aimed at the Democratic opposition. It certainly won't be the last.