XOXO: Where To Rock on Thursday, Sept. 5 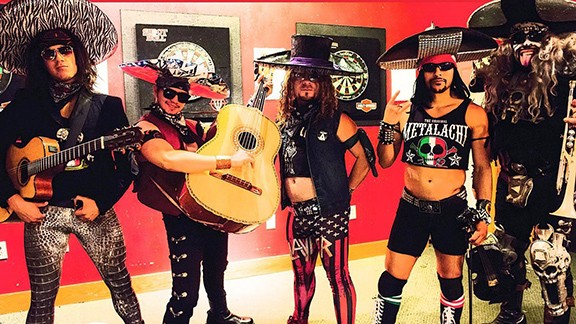 Metalachi
In July 2018, after snorting rails of cocaine that were "left in my room," chugging "a friend's" THC-infused lean and chasing it all with tequila at a nearby bar, this emo-rapper—after going outside for a smoke—felt an "explosion" detonate inside his chest. He woke up in a hospital bed. A nurse informed that he suffered a heart attack. "My whole left side was numb." Lil' Tracy does "Awful Things" at 191 Toole. Local emcee Manny Sosa drops heat during the opening slot.

With seven albums to their credit, Naked Prey formed in '82 by Van Christian, who also had stints with The Pedestrians and Green on Red. Catch this storied multi-instrumentalist as he mines for nuggets from the past and presents new material at Tap + Bottle-Downtown.

"If you're not ready to party, get the fuck out!" From Juarez, Mexico via Hollywood, "The World's First and Only Heavy Metal Mariachi Band," Metalachi go off the rails in the Paradiso Lounge at Casino Del Sol.

Traditional bluegrass? Not quite. The band describe their sound as "their own version, mixing the acoustic stomp of a stringband with the rule-breaking spirit of rock & roll." Musical mavericks Greensky Bluegrass go against the grain at the Rialto Theatre. Blues rocker Andy Frasco opens.

Exploring the sounds of the Mediterranean, Moroccan vocalist/oudist Khalid El Boujami and Bulgarian multi-instrumentalist Anton Shekerdziev set the tone at Free First Thursday. The occasion? The unveiling of I'm Every Woman: Representations of Women on Paper and Ralph Gibson: Photographs, the latest additions to the Tucson Museum of Art's permanent collection.

Four Great Things to Do in Tucson: Thursday, Sept. 5