Courtesy photo
Molly Burch
On her sophomore release, First Flower (Captured Tracks, 2018), this Austin singer-songwriter turns her  bleeding-heart lyrics away from romance to stare down her inner anxieties.

"I struggle with the anticipation of experiences. I do not have the answers by any means. [The album] is me being transparent." Molly Burch is at 191 Toole with the melancholic indie-pop of Jackie Cohen and homeboy Brian Lopez.

From Queens, this indie rapper's latest project Raw Every Day (R.E.D.) is a clash of aggressive, violent songs juxtaposed with extremely personal and introspective songs.

"I didn't approach the project with a specific concept in mind. I wanted to just be as real as possible," Aaron Cohen expands. "I wanted to tell the truth. If I felt angry, I made an angry song. If I felt sad, I made a sad song. If I was feeling like the man, I wrote a song about being the man." "Capitalist" Aaron Cohen spits blood red at Solar Culture backed by B.I.G., Amazen, DIAMONDSR8, Young Mob and others.

Leave your boombox and cassette mixtape in the closet. Classic '80s New Wave soundtracks the revelry at The Libertine, in digital. 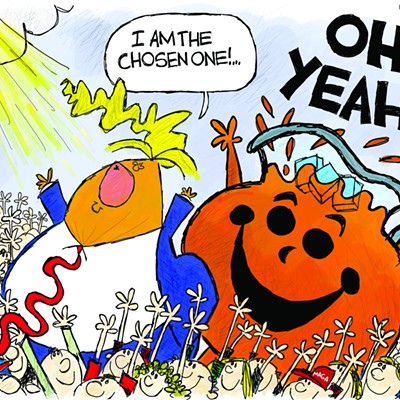 Claytoon of the Day: The Chosen One