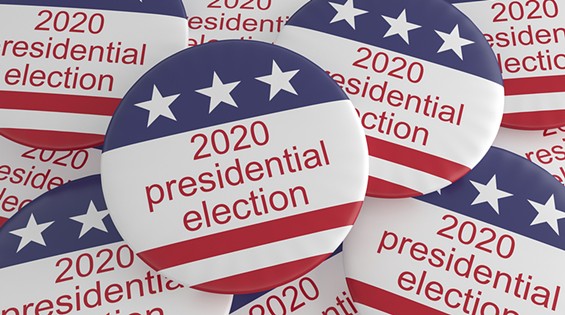 It was 2007. Three Democrats were in the running to be the party's presidential candidate. Hillary Clinton was at the top of the polls. Barack Obama, a newcomer to the national stage, was rising. And then there was the white guy who was bringing up the rear.

"Are you kidding me? The Democrats are thinking of running a . . . [arms raised in exasperation followed by an "I can't believe what idiots they are!" snort of derision] a woman or a black guy for president? Do Democrats have a death wish?"

Followed by the calm voice of reason.

"Look, we've got this young, good looking, all-American white guy with a big, winning smile, a wife who's a cancer survivor and four made-for-TV children. He's a safe bet. It's supposed to be the Democrats' turn after eight years of Bush. C'mon, let's not blow it!"

That safe white guy was John Edwards. John Edwards, who began an affair in 2006 and learned the woman was pregnant in May 2007. He denied press reports of the affair, then he denied he was the father of the woman's child. He withdrew from the race in early 2008 and later admitted everything.

The black guy with three funny-sounding names became the Democratic candidate. Oh sure, it looked like he was popular, he was doing well in the polls. Lots of white Democrats said they would vote for him. But when it comes time to cast their secret ballots, we were warned, they will vote with their secret, racist hearts. Bye bye Barack Obama. Hello President John McCain. Because, let's face facts, AMERICA IS NOT READY TO ELECT A BLACK PRESIDENT!

Except the voters elected Barack Hussein Obama. And four years later they elected him again.

It's 2019 and lots of very serious people are warning that the country isn't ready for a woman president, even though Hillary Clinton got 3 million more votes than Trump, and Trump needed every bit of help he got from Russia's trolls and Comey's pronouncements about Hillary's emails to squeak out a victory in three battleground states and win in the electoral college.

And voters aren't ready for someone too far to the left because, even though voters want Obamacare expanded and they agree that the rich have too much money and guns are too easy to buy, they won't vote for someone Trump calls a socialist.

And another black candidate can't win because, well, just because.

That leaves the great, white, moderate male hope, Joe Biden, even though he's showing signs of weakness and may lack the mental and physical stamina to go the distance. If not him, we have a few other moderate white guys with less than one percent in the polls.

Biden may have what it takes to win. I honestly don't know and neither does anyone else, about Biden or any of the other candidates who are in the running. We have two-and-a-half consecutive terms of Can't-Win presidents under our belts. Any pundit who believes it's possible to rate the electability of the Democratic candidates is a fool.

So I have an idea. Let's have Democrats vote for the candidate they really like in the primaries. Then let's pick the man/woman, Black/White/Asian, lefty/moderate who triumphs to be the candidate who goes head to head with Trump in the general.

I'm willing to take my chances with the voters. Chances are all we've got. There's no such thing as a sure thing.

Claytoon of the Day: Bigly Crowds

Claytoon of the Day: Meanwhile, On Obama Avenue

Claytoon of the Day: Hard Ballin' For Biden