NME proclaimed this festival as The Greatest Musical Event Ever. Originally billed as An Aquarian Exposition, the event brought together 400,000 young people who coexisted in peace for three days without any visible form of security. It was August 1969. Still, years later, some search for cultural significance. For some the scene conjures up images of Dante's Inferno. Bob Weir of the Grateful Dead recalls, "It was filthy. It was muddy. There wasn't enough food or facilities." Nor was it much fun for activist Abbie Hoffman, allegedly high on LSD, who took to the stage uninvited to pontificate during The Who's set—"I think this is a pile of shit while (White Panther Party founder) John Sinclair rots in prison"—and whose head was swiftly introduced to the headstock of Pete Townsend's guitar. Ouch. For others, the event became a cultural touchstone. Festival organizer/The Road To Woodstock author Michael Lang reflects, "During a time of great challenges in America...a sense of possibility and hope was born and spread around the globe. The spirit embraced at Woodstock continues to grow." As does the intrigue and legacy surrounding the event. Woodstock: A 50 Year Celebration features Anthony Aquarius Mystery: A Jimi Hendrix Tribute, The Who Experience and Creedence and Company—is at the Rialto Theatre.

Rock 'n' roll with swagger? Led by dynamic frontman/guitarist Josh Kennedy, Tempe's The Black Moods "Say It For the Last Time." At The Rock. Backed by Alien Atmosphere.

In a Rabelaisian celebration of liberation from restraint and societal dogma, under the stewardship of Tucson Libertine League's Lola Torch, Reveal: A Debut of Burlesque Performances unveils itself at 191 Toole.

The World's Only Heavy Metal Tribute to the Material Girl, Mastodonna will take you far beyond the "Borderline." Celebrate Madonna's 61st birthday at Club Congress.

Bearing No Cross, No Crown, hardcore/metallists Corrosion of Conformity, on a quest to believe, answer a call to the void. At Encore. With Crowbar.

For those not holding tickets, your chance to catch indie/folk stalwarts Calexico and Iron & Wine present their latest, Years to Burn (Sub Pop, 2019), just got slimmer. The show at the Rialto Theatre has sold out.

"Once upon a time, in your wildest dreams." The voice of The Moody Blues, Rock Walk Hall of Famer Justin Hayward, draws material from his near 50-year career. At the Fox Theatre. Acclaimed fingerstyle guitarist Mike Dawes opens the show.

"My one goal is to bring motherfuckers together with this music, enjoy the vibes and stay golden." Hip hop/rap artists Natho x $inclair, RJ, 9Boys, Desertclan and Rated R emerge from the loam. Underground Rising at Club Congress. Positive Satan x Based Hoezer supply the beats... 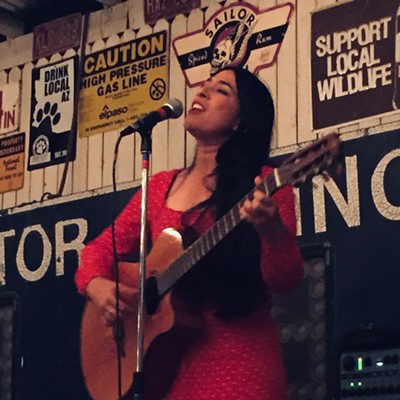