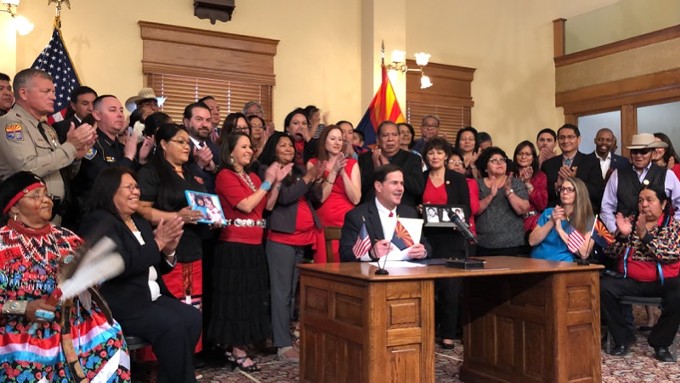 Office of Governor Doug Ducey
Earlier today, Governor Doug Ducey officially signed House Bill 2570, which intends to create a study committee to address the high number of Indigenous women and girls that are killed or go missing each year. The legislation was introduced by Rep. Jennifer Jermaine and passed unanimously in the House and Senate chambers earlier this year.

With Ducey's signature, the committee can begin working toward finding causes and solutions to these crimes, which starts with better collaboration and record-keeping between different law enforcement entities. Those solutions could lead to future legislation introduced to the Arizona legislature.

The committee will include members of state, local and tribal law enforcement, representatives from several Arizona tribes, family members of the murdered and missing women and girls and additional victim advocates.

“In some tribal communities American Indian women face murder rates 10 times the national rate, yet, there is little to no data to show what exactly is happening,” Senator Victoria Steele said in a press release. “We can’t allow our Native sisters to just disappear at this rate and not draw attention to it. Today, we are taking action by shedding light on this issue and finally giving it the attention it deserves.”

Ducey said this crisis has been endured by Indigenous communities "for far too long." He extended thanks to Sen. Steele and Rep. Jermaine for taking on the task of getting this bill passed.