XOXO: Where to Rock, Thursday, Aug. 8

Courtesy photo
decker.
Harnessing power directly from the red rock mountains and vortexes of Sedona where he resides—or so we are asked to believe—decker. (psychedelic/desert folk) channels electromagnetic Earth energy at Club Congress. He is flanked by Phoenicians Banana Gun and Wyves.

This Brooklyn-born rapper’s parents—two college professors—christened him “The seeker of truth.” Known for his activism and strong political views on police brutality, racial stereotyping and the prison-industrial complex he told HuffPo that the youth possess the energy to take to the streets. Cautioning that activism cannot be done by just sitting at a computer, Talib Kweli brings Hip Hop for Respect to the Rialto Theatre. Tucson institution Jivin’ Scientists kick things off.

Pianist and vocalist Sly Man & Sheryl Ann pick jazz, blues, pop and a few surprises from the American Songbook in the Lookout Bar & Grille at the Westward Look Resort. 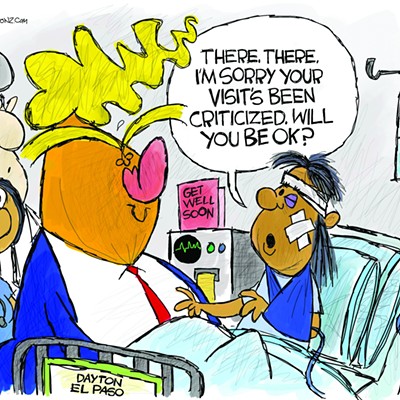 Claytoon of the Day: Consoling The Wounded

Millennials are Killing the Baby Industry By Having Pets