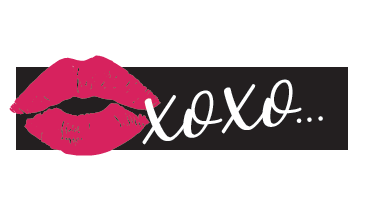 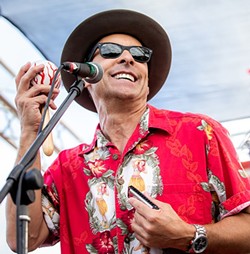 During the '90s, this alt-folk singer fronted a noisy post-grunge band, Verbena. In 2003, after the band dissolved, he found a piece of himself that had been missing and began recording American Hearts (Fat Possum Records), a transmutation towards a minimal folk sound. Despite a few modern conventions—the sparing use of a synth or drum machine—the sorrow at the heart of his music is timeless. A.A. Bondy renders "Images of Love" at Club Congress.

As humanity plunges into its darkest hour, the fog of existence has finally cleared thanks to the fruits (and campy VHS tape clips) of your favorite found footage collective, Everything Is Terrible! at 191 Toole. 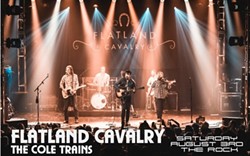 Courtesy photo
Flatland Cavalry
"We're all just out of college. By the time you're out of school, you'll have it all figured out, we were told. But that's not really how it is," said bandleader Cleto Cordero. Red Dirt country outfit Flatland Cavalry of Lubbock, Texas, storm The Rock with The Cole Trains of Safford, Arizona, in tow.

Bryan Thomas Parker & Friends dole out "lizard-flavored roots and rhythm," enough to make you shed your skin at Sky Bar.

"Round & Round": Niki J Crawford, one of L.A.'s hottest soul/blues/funk bands, return to Monterey Court.

From Barrio Santa Rosa, this bajo sexto and accordion-driven conjunto specialize in a polka and música norteño so intoxicating that one can easily lose their volition and dance with abandon. Pedro Y Los Liricos are at Exo Roast Co.

Courtesy photo
Hank Topless
The Telecasters will surely howl and snarl, during this psycho country skirmish, when The Hank Topless Band (featuring ax-man Loren Dircks) and Kentucky country/rockabilly picker Michael Monroe Goodman take to the stage outdoors on the plaza at Hotel Congress.

In 2017, the United Nations High Commissioner for Refugees appointed this Japanese pop star as a Goodwill Ambassador for his work visiting refugee camps around the world. "Under the Same Sky," Miyavi brings the No Sleep Till Tokyo Tour in for a stop at 191 Toole.

Fronted by vocalist Randy Cordeiro, Super Diamond: A Tribute to Neil Diamond play a verisimilitude of the hits that transformed the real Diamond into an international pop icon at the Rialto Theatre. Like a pearl handled pistol, The Lola Torch Trio lend dangerous intrigue.

Guitarist extraordinaire Pete Fine is Beyond Words at House of Bards. 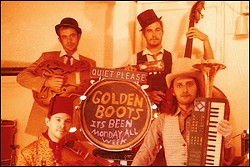 Courtesy photo
Golden Boots
Imagine that... It's an art party! Artist Dimitri Manos' latest work, "Up to Bat," is a 3-dimensional installation utilizing salvaged materials. The opening reception features a live set by Golden Boots at How Sweet It Was. DJ Ponytail Cruiser provides ambience.

"Train, Train, take me on out of this town." With no original members, Southern fried hard rockers Blackfoot perdure at Encore.

On Lucas Acid (Fake Four, 2018), frontperson/lyricist Chris Martinez came out as a transgender
click to enlarge

Courtesy photo
Moodie Black
woman. The result: An unflinchingly ferocious album of trans anthems with a glitch-laden industrial edge. "The biggest difference was just being able to write freely, openly and honestly," said Martinez. "Once you come out, there's a whole host of issues that you don't really consider. This record has a lot of that in there." Pioneers in noise rap, Moodie Black are at Club Congress with Coolzey, Liquid Space and Atmosphere.

Like your toast with jam? Mik & The Funky Brunch provide family-friendly funk at La Cocina.

All for One and One for Ball sees FebboFuentes, Billy Sedlmayr, Heroes Reunion, Amy Mendoza & the Strange Vacation, The Bennu, Golden Boots and Loveland circle the wagons in support of beloved local guitarist Joe Fanning, who was recently diagnosed with testicular cancer at Tap + Bottle–Downtown.

Is it real? Out on The Simulation Tour, Born Of Osiris wheel into The Rock with Michigan harcore/punks Spite. 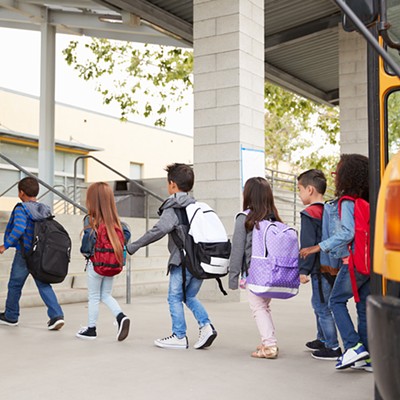 Claytoon of the Day: Leaving the Hurd