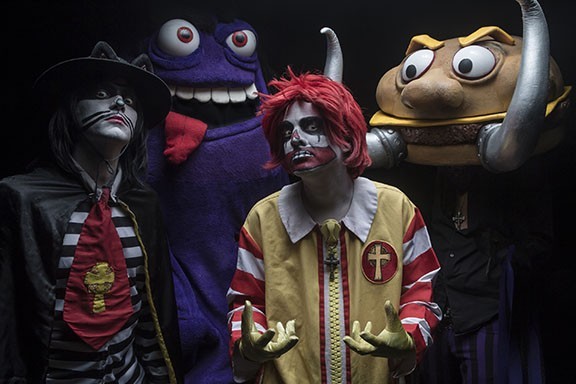 Courtesy photo
Mac Sabbath
OK. Now visualize Ronald McDonald, the Hamburglar and Mayor McCheese rockin' "the absolute fuck out" while covering Black Sabbath tunes. Right? Bear witness to this bizarre spectacle when Mac Sabbath roll The American Cheese Tour into 191 Toole. Adding to the appreciably high drama are Phoenix metalists Okilly Dokilly (who are dedicated to The Simpsons' Ned Flanders) and Playboy Manbaby, credited by Rolling Stone for "bringing sexy back to the genre of polka."

A sweaty summer just got a bit hotter. Humphouse's Disco Doll will be in the house spinning classic disco at Club Congress.

TPD officers and local punk rockers face off in The Great Punk'n Donuts Pig Out of 2019. As if that weren't enough, The Sindicate, Drizzle, The Cubes, Garrett William Moore and D[Form] are slated to perform all at Spark Project Collective. Donations will benefit Pathways Education Center, a nonprofit for children with learning differences and autism.

"Just for the Record," Hank Topless performs "Happy Time Blues" at The Bambi.

Adding something, uum, septic into the mix, Gutter Town shares the stage with Pretty Ugly, Texas T. Trash, Lost in the Sauce and Cactus Mike and The Pricks at Thunder Canyon Brewstillery.

DJ Stubbie keeps the myth alive during The Fineline Revisited at the Surly Wench Pub.

Since 2005, these multiple Best of Tucson winners for Best Cover Band channel new wave classics, pop and power ballads from what could be your favorite decade. 80s & Gentlemen rock on the rooftop at Playground.

Released in late April 2016, this Miami rapper's debut album Underground Underdog shot like a bullet up the charts to reach number 2 on iTunes Top Hip-Hop Albums to sit right behind Drake. Not too shabby. Firing off "1000 Rounds," Pouya spits straight '90s hip-hop and Memphis fire when he brings The Liquid Sunshine Tour to Encore. He's flanked by Ramirez and Boobie Lootaveli.

"His songs move like the wind/He is the lone coyote howling in the desert/He has no secrets/He knows where the water is/You have to listen carefully/Maybe get down on your knees/And put your ear to the ground." –John Densmore, The Doors. Singer/songwriter  John Coinman is accompanied by bassist Blair Forward are at Exo Roast Co.

Formed in Illinois 1967, this self-described "rock and roll band with horns"— is readily capable of cranking out the kind of ballads that become prom themes or accompany wedding vows—provided toothsome nosh for the MTV Generation to nibble upon during their zenith. In a career spanning five decades—having amassed 47 gold and platinum records worldwide—this powerhouse has not missed a year of touring since its inception. Rock 'n' Roll Hall of Famers Chicago is at Tucson Music Hall.

They traveled the great expanses playing swing and West Coast blues. Now, The Kings of Pleasure reunite to jump, jive and wail once again at the Hideout Saloon–East.
click to enlarge

Courtesy photo
The Kings of Pleasure


Small wonder. This Americana singer-songwriter grew up in "a little bitty ranch house crammed with 10,000 books" and was weaned on a steady diet of Johnny Cash and Roy Acuff records. At age 7, his novelist father, Larry McMurtry, gave him his first guitar.

"My mother taught me three chords and the rest I just stole as I went along."

Fast forward to 2005, when his song "We Can't Make It Here"—which criticizes George W. Bush, the Iraq War and Wal-Mart—was praised by Rolling Stone's Robert Christgau as "the best song of the 2000s." Its lyrics cut like incisors. "Will I work for food, will I die for oil/Will kill for power and to us the spoils/The billionaires get to pay less tax/The working poor get to fall through the cracks/...Let 'em eat shit."
James McMurtry is at Club Congress with the sly, whiskey-soaked country of Bonnie Whitmore.

See the colony of bats under Campbell bridge