Courtesy
Gentlemen Afterdark tie-up Alice Cooper.
Hearts pounding—having just sprinted the half-mile from the neighborhood 7-Eleven back to a rented band house, near 22nd Street and Alvernon Way—they arrive in a panic, rooster manes disheveled after a routine beer run gone awry. Brian Smith, then frontman for Gentlemen Afterdark, explains, “We got hassled for how we looked, of course. This pair of rednecks in a small pickup truck chased us home, hell-bent to cave our skulls in.”


The saga continues: “When we got there, Winston [Watson], the smallest kid in the band, pulled out this authentic looking BB gun pistol and ran out the door screaming bloody murder. Out on the street he took this hilarious cop stance with legs apart and pointed the toy gun, his elbows straight, at those rednecks in the pickup. They freaked and ducked and skidded the hell out of there.”

This and so many incidents similar served as inspiration for “Open the Door." A song recorded 36 years ago—now enjoying an uncanny resurgence after finding placement on the season premiere of Netflix’s Stranger Things, starring Winona Ryder and David Harbour. And this season is red-hot. The third installment of the nostalgic horror series is the new Netflix four-day streaming champion; 40.7 million households watched over the long Fourth of July weekend.

Truth being stranger than fiction. Who would’ve ever imagined?

Dancing on the crumbling precipice of fame, in 1984 they were vaunted by People magazine as “Stars of the Future.” The piece included a quote by rock legend Alice Cooper, a mentor who had taken the Gents under his wing.

“They reminded me of when I was young.” Cooper quipped, “I told them to have my daughter back by 7:30 p.m.”

In spite of such accolades Gentlemen Afterdark struggled to safely traverse the intersection where art and commerce converged.

Produced by Cooper and Dick Wagner, “Open the Door,” written by Robin and Brian, is from their 1983 EP. Originally self-released on vinyl, recorded at Vintage Recorders (Phoenix) in sessions which Barry Smith describes as being tense:

“[We were] young and hungry—pop music was exploding in all directions: Rap, post-punk, new wave. New sounds and energy were badly needed. But tension came from musical culture clashes. They wanted us to go with a safe sound of much of the pop music back then.”

Low on self-confidence, a shaky-voiced Brian found himself facing his musical idol through the studio glass, toiling to lay down the vocal track.

A now-sober Brian says, “My voice sounded so constricted here. I was so fucking terrified because, well, that was Alice Cooper. And Dick Wagner, who played guitar with Lou Reed. Those guys wrote 'Only Women Bleed' together. But my band was amazing, they were so young and gifted." 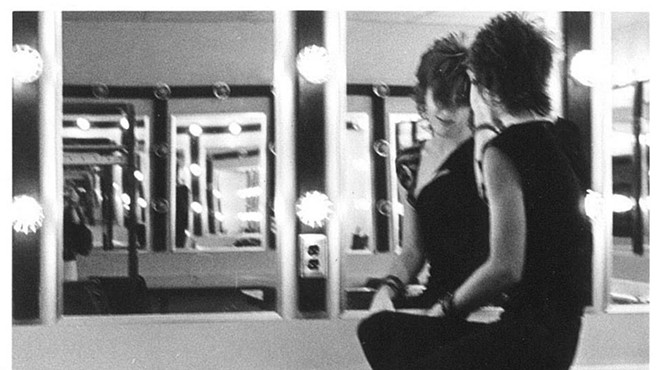 
But what does this triumph mean to you now? “It’s very cool,” Barry says. “It comes at a perfect time...Gives a certain spiritual boost to my confidence.” Kid brother Brian says, “It is hard to get my head around the idea of that terrified voice now soundtracking a Winona Ryder scene in an episode of one of the most popular TV shows on earth. But I am really grateful for the song placement. There is something about this song, this sound of kids trying to find a sound. That struggle sounds pretty damn interesting now."

Chicana punk band Fea has plenty of inspiration these days