Chicana punk band Fea has plenty of inspiration these days

When San Antonio punk rockers Fea started making music in 2015, they sought to combine their Latina upbringing with a modern, rebellious punk sound. Their songs "Mujer Moderna" (Modern Woman) and "Feminazi" held quite overt stances on race and gender issues, as did their band name itself, meaning “Ugly Girl”. Suffice to say, in the politicized years since, they’ve had plenty of material to work with.

“There’s been tons of things happening in this country. I mean, we have Trump in office, and he’s literally a reality TV star,” says drummer Phanie Fea. “Obviously there’s been women’s rights, race, and immigration policy. We try to touch on a lot of that.”
click to enlarge 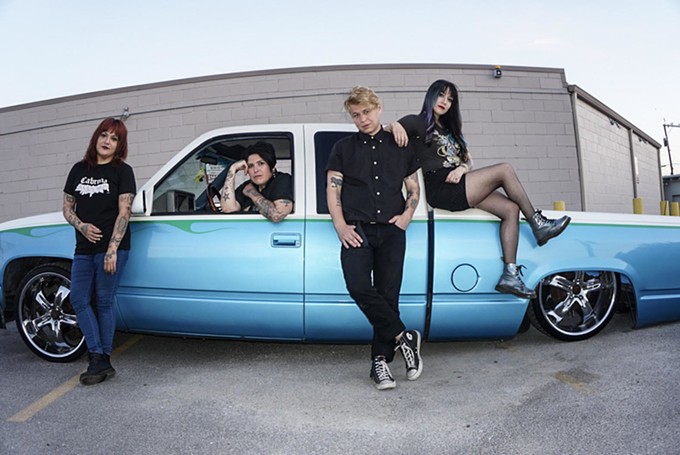 Often grouped into the aggressive, feminist punk genre “riot grrrl”, Fea differentiates themselves with a strong ear for melody, lyrics in both English and Spanish, and a healthy dose of humor. Their upbeat, danceable rock sound quickly caught Joan Jett’s attention, who released their debut self-titled album on her Blackheart record label.

Their 2016 debut album ranges from clear, defiant punk on songs like "You Can't Change Me" to modern renditions of mythology on "La Llorona”. The latter tells of a ghost in Mexican folklore, but subverts the common narrative by telling the story through the first-person view of La Llorona. Their music also ranges into the territory of humorous vignettes on songs like "Sister K,” which tells of an especially mean Catholic school nun of whom Letty says, "If she was Jesus Christ, I'd have hammered the nails myself."

“We definitely have some silly songs,” Phanie says. “It comes natural, we’re kind of goofy chicks. Like, there are things that are shitty and you need to know when to speak up on them, but that can’t be all.”

According to Phanie, the four members of Fea work well together because they were raised in a similar fashion. They were raised by mothers and grandmothers, so wanting to focus on strong women figures in their music came naturally.

“My parents were raised thinking that to speak Spanish was to be looked down upon, that if you spoke it in school, you wouldn’t get as far,” Phanie said. “But no matter what, no matter who you are or where you’re from, you still have to work hard. A lot of what we’re doing now is kind of proving ourselves.”

But perhaps no song on their debut quite sums Fea up like “Mujera Moderna,” which examines violence against women over a classic punk groove. The lyrics of "So what if her shirt is low cut, and her jeans are tight / Tell me why, tell me why do you think that it's alright when she puts up a fight?" fit surprisingly well to a danceable, energetic rhythm.

In the three years since their debut release, Fea have become an even more cohesive unit, Phanie says. The bass and drum lines fit in as structure to the stories Letty tells in each song. Fea recently finished recording their new album, but a release date remains elusive. The song topics can still range wildly, but generally stick to a conscious messages.

“One song can be about vanity while another is about whatever the fuck Trump said today,” Phanie says.

Although Fea has more material than ever to sing about, Phanie says their music and message is spreading in a positive way.

“We’re seeing a lot of people supporting what we’re doing,” Phanie says. “Often it’s feminists or the queer community, but there are even people who are just curious about our music… it’s been very positive.”

More recently, Fea has scheduled out a tour throughout the Southwest where they plan to play the songs off their upcoming album. On top of that, they continue to be praised by classic punk musicians, such as when Iggy Pop gave Fea a shoutout in Rolling Stone. And it’s only natural, so long as there are race or gender to discuss, the members of Fea plan to rock about it.