In The Limelight | Birds and Arrows 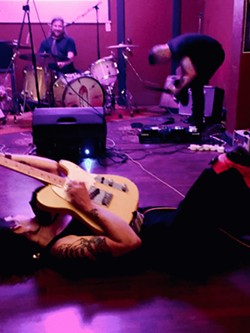 Xavier Omar Otero
...all that remains is the debris trail.
Like Aves filling their four-chambered hearts with joy, soaring where the clouds of emotion no longer obscure the clear sight of the soul, Birds and Arrows shoot bolts of deliverance with courage as they move forward.

They formed in Chapel Hill, North Carolina in 2007. After releasing four full-length albums and critically-acclaimed EPs—this husband and wife duo's songs appear on compilations with Jeff Tweedy, Yo La Tengo, Ryan Adams' Whiskeytown and the mythic Big Star—having outgrown their genesis as a quiet folk act, Andrea and Pete Connolly came to shed their skin under the desert sun, peeling away the old atop metamorphic rock, to allow further growth.

“Yes, Arbitrary Magic was a departure. But, true to all of our biggest influences,” says Andrea Connolly. “I’d say this is our new direction—finding a balance between energetic, hard hitting Rock ‘n’ Roll and melodic, harmony based song craft.”

Andrea Connolly says of the video, directed by Tyler Lidwell, “As far as ‘Animatronic Heart’ goes—that song was influenced by taking care of Pete's dad, the last few years.” A significant factor behind the couple’s decision to relocate to Tucson. “It's a pretty heavy subject about life, aging and our interconnectedness.” In comparison to the seven other rollicking tracks on the album, “Animatronic Heart” is the exception. “So, to add some levity, we thought it would be an interesting/humorous juxtaposition to have the video reference a classic action movie, like Terminator 2.”
Here is the other side of the coin.

When asked if politics ever seep into the lyrics of Birds and Arrows songs, Andrea Connolly is quick to rebound. “Yes, definitely. ‘Overloaded’ is very political. Influenced by all the shit that is happening along the border. As is, the song ‘Stay Down.’ It’s about violence against women. It’s hard to not let all that come through in our writing. If at times, on this record, we seem a little pissed off...It’s because we were.”

Tags: Birds And Arrows , In The Limelight , XOXO , Image

What ABOUT Beethoven's hair?