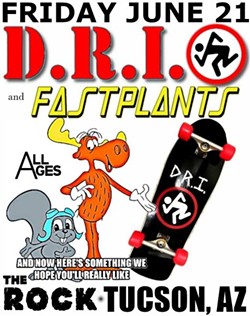 Traveling through the orangy-pink tropical sky faster than a "Supersónico" boom. From East L.A., psychedelic cumbia punk rockers Tropa Magica return to burn one with Los Èsplifs. At Club Congress.

It's an art + noise mashup. The experimental/electronic/noise/drone of Clown Doll, Black Baptist, Schadenhaus and Ruin Dweller will push you towards the edge of psychosis. At Ward6.

Fronted by Luci Furr, Pigmy Death-Ray celebrate the darker side of rock 'n' roll. Phoenix's Noonday Devils and Gutter Town are the things that go bump in the night. At the Surly Wench Pub. 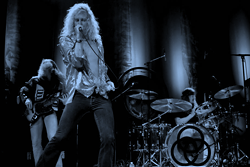 Once upon a time, when dinosaurs roamed the Earth, there emerged a mythic band from the UK: Led Zeppelin. For 23 years, ZoSo have provided a ticket to board a time machine—back to an era in rock history that defined glamour and excess—for all who dare climb the "Stairway to Heaven." The attention to detail is impressive. Yet, it's more than verisimilitude: Vocalist Matt Jernigan's lion's mane, kimono shirt and bell-bottomed jeans that epitomize Robert Plant. Or employing vintage instruments: A Ludwig Vistalite drum kit or Gibson EDS-1275 double-neck guitar. It's the musicianship—from guitarist John McDaniel's spot-on rendition of Jimmy Page's complex solo on "The Song Remains the Same" to drummer Bevan Davies' savage barehanded drum pounding, as the mighty John Bonham once did, during "Moby Dick"—that truly captures the magick of a band who decades after their heyday still inspire zealotry. ZoSo: The Ultimate Led Zeppelin Experience play the Rialto Theatre. The warm come soulful wail of Miss Olivia & The Interlopers tell A Few Little Stories.

In 1975, the release of Desolation Boulevard (Capitol Records)—fueled by the strength of chart topping hits "The Ballroom Blitz" and "Fox on the Run"—catapulted these English glam rockers into the American mainstream. The Sweet play the hits and a few surprises at Encore. Midnight Transit Co., and Funky Bonz open the show.

Taking on the time-tested tropes and poses of classic rock, Phoenix sybarites Wyves, in search of "Distractions," are on a road trip with "Princess Excess" to "Mar-a-Lago." And rumor has it "Bitch Has Got Problems." Local stalwarts Greyhound Soul and Crooked Saints are onboard for this hell ride. At Club Congress.

Experimental noise maker Quaker Folk (aka Steven Cosand) says adios to the Old Pueblo before heading down to Dixie. He shares his Harshest Piety for all to experience mouth agape at Bar Passé. With the music of Nobody (aka Willis Earl Beal), Sean Bonnette, Nullus and Jaime Soto.

Recently signed to Mint 400 Records, indie/alt rockers Home is West of San Clemente, California, are "Waiting" for "The Moment" to shine. At Irene's Holy Donuts. Flanked by locals Flying Half Full and Beyond the Firewall.

Solar Culture Gallery is the site of Summer Shootout. A celebration of Tucson's hip hop scene with performances by: 9D5, Aske, Rick Tensai, Soul Point, Marne Dom, Ago, as well as DJ sets by Shamiro Blitz and Based Hoezer...

You know her as the frontwoman of Taco Sauce and Juju Fontaine. Gabi Montoya performs solo at Tucson Hop Shop.

"Wipe Out!" It's time for the summer surf party of the season. Surf-a-palooza unites The Surfbroads, Shrimp Chaperone and The Furys for this common cause. Watch the colorful beach balls bounce on the plaza at Hotel Congress...

Be soothed by the bohemian folk rock of Little Cloud on the patio at Che's Lounge. 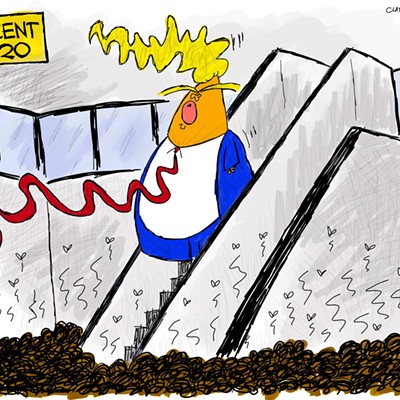