Like fevered Vikings high on self-delusion, “We’ve have had a hard time explaining...Sadly the outside world has shown to be underdeveloped when it comes to understanding the true value of metal. Luckily, the King of all kings has taken it upon himself to educate the people of Earth.” “With Horns in the Air,” Swedish metalists Avatar Country charge into the Rialto Theatre. With former Strapping Young Lad Devin Townsend performing acoustically, synthwave duo Dance With The Dead and noise punks ’68 in tow.

“The best thing about making reggae music is its power to change the world. To make it a better place for everyone,” affirms Ibrahim Touré. Adding something unique to Tucson’s diverse talent pool, rooted in their common love of reggae, General Tchefary and Santa Pachita unite to spread a message of social justice and environmental awareness, while the wicked Caribbean and Latin rhythms traverse international borders and all aspects of humanity at 191 Toole.

Spektrum brings the modern dark underground to R Bar. DJs Moonshake and Ricky Strange spin—darkwave, EBM, coldwave, goth—in an all vinyl homage to the Babes of the ’80s.

The waves of this pablum musical genre crested during the 1970s and ’80s, when Hawaiian shirts sang of wind, sails and adventure, and the music of Pablo Cruise, Rupert Holmes, Christopher Cross and Player led the vanguard. Love it or hate it? Drift away on a piña colada-scented breeze with the softest of soft rock when Yacht Rock 2019 returns to La Cocina Restaurant & Cantina. DJ Herm presides.

Take snaps. The Öhmlauts, Gila Byte and JJCnV do unspeakable things at the Surly Wench Pub.

Two Bands. One stage. Duking it out until one succumbs (or their set ends). Tucson Duels: Lenguas Largas vs. Thee Pork Torta. At The Screening Room.

Comprised of immigrants, these hardworking laborers by day/talented conjunto musicians by night are proud of their civic contributions to the community. Pedro y Los Lîricos keep the music of the Mexican diaspora alive. At Exo Roast Co. Be there, no jodas.

They began as light-hearted buskers in a Greenwich Village subway in 2006. Now, tales of class division and diseased American capitalism litter their latest release. Hailing from the Catskills, far from modest, folk/country rockers The Felice Brothers Undress (Yep Roc Records, 2019) before all at 191 Toole. Troubadour Jonathan Rice sullenly commemorates a “Hollow Jubilee”.

The last time the world’s first and only heavy metal mariachi band, was in town a recording of AC-DC’s “Hell’s Bells” blasted through the PA as roadie turned hype-man Warren Moscow prepped the crowd. His banter, a bit heavy handed. “Alcohol is your friend. If you’re not ready to party, get the fuck out!” But, he knew his crowd well. “From Juarez, Mexico via Hollywood,” Metalachi return to Hotel Congress. The plaza will never be quite the same afterwards.

Taking you on a track-by-track multimedia lecture, esteemed Beatleologist Scott Freiman will explain the inspiration behind and evolution of these beloved songs in this fabled recording studio. Deconstructing The Beatles: Abbey Road unfolds at the Rialto Theatre.

You may find yourself “staring at the sky on a cloudy day, feeling deep in your soul that the world is a hard place, and closing your eyes to a honeyed rainbow of magical jam.” With a heavy dollop of “Coconut Cream.” Become a convert. The Rifle are at Che’s Lounge.

The Desert Blooms with the acoustic guitar-driven sounds of the Paul Opocensky Project at Irene’s Holy Donuts.

Comprised of esteemed cornetist/pianist Dante Rosano, violinist Samantha Bounkeua and guitarist/clarinetist Marco Rosano, Two-Door Hatchback is at once sophisticated—with elements of jazz, classical and thought-provoking lyrics as found in folk storytelling—yet whimsical, if not quirky. At Exo Roast Co.

Accompanied by some of Tucson’s finest jazzers—bassist Bobbi Elias, guitarist Dan Griffin, saxophonist Mike Moynahan, trapsman Burt Shur and vibraphonist Joey Glassman—pianist Louis Colaiannia & Friends balance the concord between melody and harmony and the fire of improvisation. At Sea of Glass: Center for The Arts.

Black Renaissance will host the official afterparty for the Juneteenth Festival. Featuring performances be Teré Chapman, Mattea and live art by Sketch 71. At Wooden Tooth Records.

Singer-songwriter Dal Hodges will be “playing some acoustic guitar, singing some songs, flubbing some chords, getting some lyrics wrong, and talking too much.“ At The Dusty Monk Pub.

“Once Bitten, Twice Shy?” Well, maybe not. Jack Russell’s Great White are still on a feeding frenzy. And they are making a stop at Encore.

Time to visit the ophthalmologist? From New Castle, the shining hope of Hopeless Records, pop punks Trophy Eyes declare that it’s “Friday Forever” on a Sunday night. Paired with Crooked Eyes at 191 Toole.

From Oxnard, California, Heretic A.D. unleash a dark, brutal, violent, metallic sound at Ward 6. With Legions, Order66 and others.

As the mercury continues to rise, it’s sure to be a Barefoot Blue Jean Night when country star Jake Owen steps “Down To The Honkytonk” for a cold one. At AVA Amphitheater. 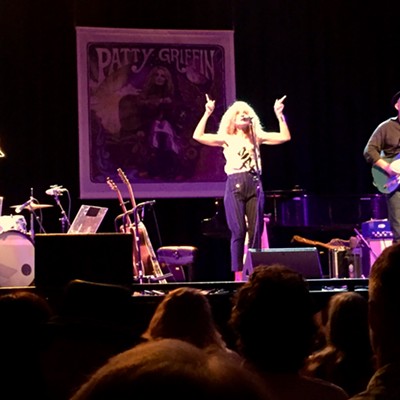 In The Flesh | Patty Griffin