Multiculturalism in effect: Their rich sound is a mezcla of rockabilly, cumbia, jazz and Gypsy sung, in both English y Español. Their odyssey began when a 20-year-old, trumpet-wielding firebrand of an English singer moved to Spain to form a band with a rockabilly double bassist and the “best flamenco/punk guitarist” that the two of them knew. Clear away any buffelgrass when Jenny & The Mexicats blaze a trail towards the Rialto Theatre. With slamming Oakland quartet Bang Data. “It’s enough to drive a motherfucker loco.” 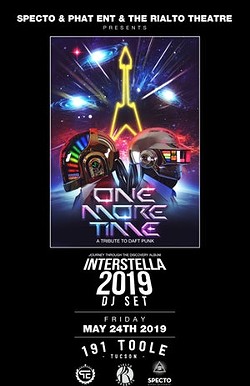 Courtesy 191 Toole
Armed with replica chromed LED helmets and retro costumes, One More Time: A Tribute to Daft Punk promises to take the uninitiated and well-seasoned time travelers alike on a sojourn through Daft Punk’s Discovery (2001) album. At 191 Toole.

Blacklidge Community Collective is the site of an all-ages punk/metal event. Featuring the Nintendo grind of Cybearg, BYOM, Muddle of Pud and The FIST.

The B-Sides play “the songs you forgot that you loved,” while Breaking Glass fill in the low end blissfully. At Irene’s Holy Donuts.

Out on the Mutation Tour, Midnight Tyrannosaurus’s heavy dubstep beats create “Brain Sludge” at Gentle Ben’s. DJs Ramrod, Sirenz and Cursor trade off behind the decks.

The Unday and Shooda Shook It fill the existential void with melody and groove. At the Surly Wench Pub.

From Long Beach, the Laurie Morvan Band add their unique shade of color to Blues Fridays on the plaza at Hotel Congress.

Canadian psychedelic rockers Black Mountain’s latest, Destroyer (Dine Alone Records, 2019), named after the single-run 1985 Dodge muscle car of the same name, captures all of the wide-eyed freedom that comes along with scoring one’s first driver’s license, feeling invincible, and being fully in the driver’s seat. At 191 Toole. Birds & Arrows and La Cerca propel the evening forward.
click to enlarge

Shout out to all the juggalos. Violent J and Shaggy 2 Dope bring back the “Dark Carnival.” Hide your offspring. Insane Clown Posse storm the Fury Tour into the Rialto Theatre.

The heavy stoner rock of Manguera along with Kryge, Copper Magma and Jaeki will have Irene’s Holy Donuts rockin’ into the dawn.

Backed by some of Tucson’s finest, Emilie Marchand sings jazz standards, ’60s soul and vintage country. In the courtyard at Mercado San Agustin.

The Arizona Symphonic Winds serenades in the night air. At Udall Park. Bring a blanket or lawn chair.

They topped the charts during the decade best known for Ally McBeal, Dolly the first cloned mammal, My So-Called Life and the public debut of the World Wide Web, The ’90s House Party, featuring Vanilla Ice, Rob Base, Tone Loc and Coolio, keeps “The Last Great Decade” alive. At the AVA Amphitheater.

A metalcore/deathcore extravaganza unfolds at The Rock. On the bill: Decayer, With Crows, Serpents Tongue and Endings.

Roman Catholics are not the only denomination razzed about tipping the chalice If you like your folk music straight with no chaser, nationally acclaimed folk singer-songwriter Don Armstrong & the Whiskeypaliens perform on the plaza at Hotel Congress.

From Chicago, EDM artists Autograf believe in leaving a mark on the world. At Gentle Ben’s. Lephan, Corbin, Lance Fairchild and Mental spin.

Miss Olivia and the Interlopers perform in the tasting room at Sand-Reckoner.

Celebrating 22 years of swing mania, Hipster Daddy-O and the Handgrenades detonate on the stage at Club Congress. The recently crowned winners of Battle for KFMADay, The Endless Pursuit, instigate the assault.

Soul Night: Hip hop, blues and soul are on the menu at Sky Bar. Shekinah, Chakara Blu and Just Najima will shine brightly.

Vocal chamber ensemble Camerata Sonora perform traditional/sacred music from Scotland, England and America. At Sea of Glass-Center for The Arts.

In what is becoming an annual tradition, Loveland play in honor of Memorial Day. On the patio at Che’s Lounge.

And, closing the Spring Concert Series, “The Sandman” Howe Gelb refracts the light under the stars. At Hotel Congress. Birds & Arrows and David Huckfelt share the stage.