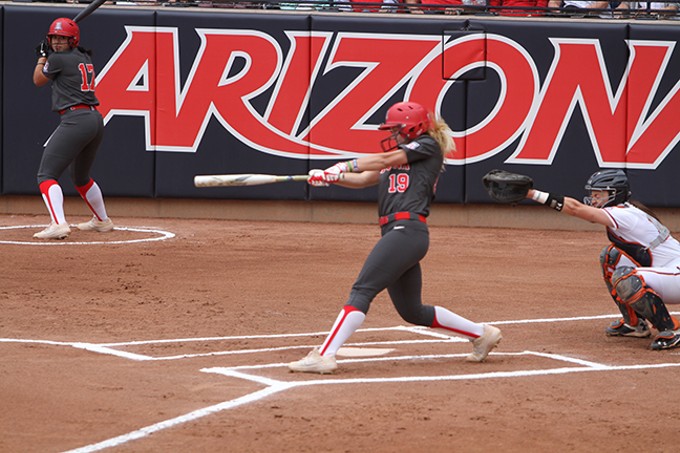 The Wildcats (45-12) advanced to next weekend’s NCAA Softball Tournament Super Regional, after beating Harvard (5-1) and Auburn twice, by scores of 2-1 and 12-3.

Harper smashed three home runs in the team’s win on Sunday, becoming the first Wildcat since Hallie Wilson in 2009 to accomplish such a feat.

The junior belted her first of three in the game’s third inning, smashing a two-run home run that gave the Wildcats a 3-0 lead.

The Tigers would answer back in their half of the third, scoring three runs on an error, a triple and a home run.

That would be it for the Southeastern Conference power, however, as junior Wildcat pitcher Alyssa Denham found her groove in the circle, limiting the Tigers to four hits in seven innings of work.

Candrea’s squad put Auburn away for good in the game’s fourth inning, scoring six runs on four hits, with redshirt junior Alyssa Palomino-Cardoza hitting a three-run home over the batter’s eye behind the center field wall.

Harper continued her tear from there, hitting two home runs, in the sixth and seventh inning, driving in three more runs to give the Wildcats a nine-run margin.

Harper finished the day with a 5-for-5 mark at the plate, driving in five runs for the Wildcats in the one-sided romp.

Palomino-Cardoza finished the day with two hits and four RBIs, while Rylee Pierce and Hannah Martinez had two hits apiece for the Wildcats.


Arizona faces another SEC power, in Ole Miss, who beat the University of Louisiana in the Oxford Regional over the weekend.

The two nationally-seeded teams will face off over the Memorial Day weekend, with the schedule not announced by press time Monday.

Candrea analyzed his team’s performance against Auburnand previewed the Wildcats’ meeting with the Rebels in his postgame comments Sunday afternoon.

The key to advancing to the Super Regional, according to Candrea, was the pitching performances turned in over the weekend by Denham and ace pitcher, Taylor McQuillin.

“Well, we’re one step closer to where we want to be; so good performance today,” Candrea said. “…A lot of good things are happening right now, so, we just need to get a little rest and get prepared for next week.”

Harper, who currently leads the nation with 28 home runs this year, touched on her power hitting, attributing it to her improving patience at the plate.

“I’m not really going out there looking for anything particular, I’m just going for something to strike,” Harper said. “I’m pretty well-known for hitting balls that are not necessarily the best, and that are kind of out of the zone. But it was working today, and I was feeding off my teammates. We were getting some good hits today.”

The Wildcats were able to capitalize on the Tigers’ pitching staff, with 14 hits in Sunday’s finale.
Candrea believes the Wildcats, who last reached the Women’s College World Series in 2010, are playing their best softball at the moment.

The Wildcats can reach the WCWS by taking two of three from the Rebels at Hillenbrand Stadium this weekend.

Candrea is confident the team’s performance against the Tigers and Crimson over the weekend shows that they’re ready for whatever awaits them this weekend.

A big reason for the team’s recent success, according to Candrea, is the team’s improved confidence in big games, which stems from his staff’s teaching throughout the year.

“We’re playing pretty good right now,” Candrea said. “The one thing that I look at it our mindset right now. It’s so much better than it’s been in a long time … I think they finally realized that and they’re not internalizing that themselves.”

A major trope entering the regional round of the NCAA Tournament was the SEC getting 12 of its 14 teams into the 64-team event.

Denham, who improved her yearlong record to 12-5 on Sunday, said the Wildcats were excited to play teams like Auburn over the weekend, but added that they don’t see the conference as any different from their own.

“For me personally, the Pac-12 is a really hard conference, and I feel that we’re prepared for whatever team that we face,” she said. “Whatever conference that they come from, and I think that right now we’re focused on finding a way to win.”

Candrea said beating the Tigers on Sunday was sweet, but that he’s not focused on the team’s conference affiliation. For Candrea, the key is reaching the WCWS in Oklahoma City, which will require the Wildcats to knock off the Rebels, who won three-straight elimination games to capture their regional on Sunday.

“I pretty much have short-term memory,” Candrea said. “I mean, you can stew over things, but in the long run it doesn’t do you any good.”

Candrea certainly didn’t have much to stew over on Sunday, with a week to hark back on what went well for the team, ahead of a best-of-three series in Tucson with Ole Miss.

Denham, who transferred to Arizona from the University of Louisiana after her freshman year in 2017, was asked about her thoughts on avoiding the Ragin’ Cajuns in the Super Regional.

“I don’t think it matters what team we play,” she said. “We’re going to beat whoever comes into the dugout. It doesn’t matter if it may be my old school, or whatever, but yeah, I’m really excited for next weekend.”

The Story In Pictures | L7 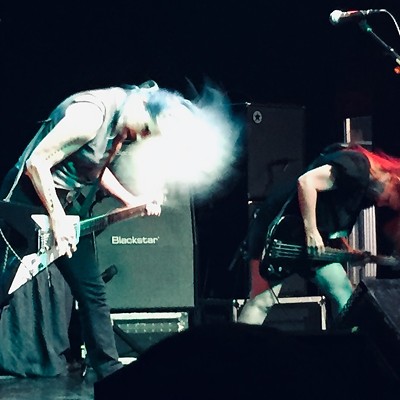