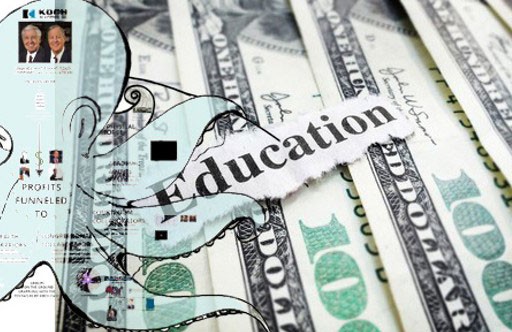 I don't know which state senator, or senators, stuck a half million dollar request for a new "Freedom School" at Northern Arizona University into the Republican senators' budget proposal. But someone did.

UA and ASU both have versions of the Koch brothers' libertarian outpost on their campuses, but Flagstaff's NAU is currently Freedom-School free. That could change, however, if the proposed funding makes it into the budget.

Don't mistake the request for extra money for a new Freedom School as a Republican change of heart when it comes to funding education. The same budget proposal cuts millions from Ducey's proposed university and K-12 budgets.

I've written often about UA's Freedom Center and less often about its ideological sibling, ASU's School of Civic and Economic Thought and Leadership. Both received lots of money from members of the Koch donor network when they started out. FC became a state budget item in 2014, and SCETL's state funding began in 2017. The current budget includes $3.5 million for FC and $4 million for SCETL. Both centers will likely get the same funding in the upcoming budget.

As for that modest half million dollar funding request for the proposed NAU Freedom School. The small figure is a ruse, a way to get the thing up and running with as little controversy as possible. After all, what's a half million budget request between friends? The UA Freedom Center began the same way, with a half million state budget for its first three years. Now FC's annual budget is seven times that original figure.


Here are a few interesting and unusual facts about the funding for FC and SCETL.


• They are the only university "schools" or departments with their own line items in the state budget.
• Neither school has been able to spend all the money it gets from the state.
• The schools don't have to return what they don't spend. At the end of the year, they just stick the surplus in the bank, to be used at some later time.

I expect the same deal will hold for the NAU outpost if it's approved.

This new funding is yet another irony piled on top of the irony-laden funding of the UA and ASU schools. The folks who rail against big government, who want less government spending — among other things, they want to cut public schools to the bone, even get rid of them entirely if that's possible — are delighted to accept an $8 million government handout to further their anti-government agenda.

I'm surprised this new "Freedom School" request came from someone, or a few someones, in the senate and not from the governor's office. Doug Ducey has always been the Koch network's bouncing baby boy in Arizona. The network helped fund Ducey's campaign against the one cent sales tax for schools when he was state treasurer in 2012, then it helped bankroll both of his gubernatorial campaigns. In return, Ducey funded the Koch outposts at UA and ASU. Maybe some mystery senator behind the new budget request has aspirations for higher office and is looking to cultivate a few deep-pocketed donors.

Ducey likes to call himself the Education Governor, but his school budgets have yet to reach the 2008 level before the recession hit, and he's an advocate for expanding our two private school voucher programs. The governor is no great friend of public education. Still, when you compare him to what the Republican senators are proposing, Ducey looks like an educational big spender.

Take a look at Ducey's budget proposal for education compared to what the senate Republicans want to spend.

There's one item in the list where I agree with the senate Republicans. We should zero out that gift to districts in wealthy communities known as Results-Based Funding. But it shouldn't be cut from the education budget. The money should be moved over to the general K-12 funding so all districts and charter schools get a share of it.

The state needs more, not less funding for public education, contrary to what the senate Republicans propose. What we don't need is another academic outpost whose purpose is to disseminate the ideology of the Koch network and its political allies.

XOXO: Where to Rock Wednesday, May 15