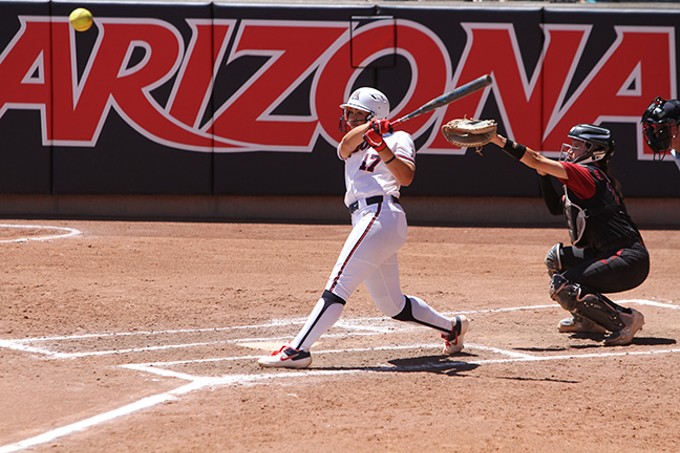 Christopher Boan
Arizona junior infielder Malia Martinez drives a pitch to left field during the Wildcats' 13-2 win over Stanford University on Saturday, April 20.
The University of Arizona softball team is in the midst of a historic winning streak, with the Stanford Cardinal serving as its latest victim.

Arizona belted three home runs in Thursday night’s 7-0 opener, with Reyna Carranco, Dejah Mulipola and Hillary Edior all going deep. Senior southpaw Taylor McQuillin tossed a three-hit shutout in the pitcher’s circle on Thursday, striking out five hitters in seven innings of work. Friday’s game saw the home side use a five-run fifth inning to ensure a run-rule win, with Mulipola adding two more home runs and five RBIs, while Edior added a double and two RBIs of her own.

Perhaps the brightest moment from Friday’s one-sided victory was the postgame celebration of coach Mike Candrea’s 1,600th win with the program.

Candrea, who started coaching at Arizona in 1986, became the first Division I coach to reach the 1,600-win plateau, taking the feat in-stride.

“It means I'm older,” Candrea said. “I mean, I always go back to the coaches that have coached here and the players have played here, and to be able to sustain a level for this long, it takes a lot of different people. And so, it's really a tribute to all that have ever been in this program.”


Candrea praised his team’s ability to dominate a talented Cardinal team, leaving little doubt that his side is playing its best ball at the right time.

“Stanford came in here, I think, feeling really good about themselves,” he said. “They're a good ball club, and they've been playing well. So, I tip my hat off to our kids. Here and ready to go.”

Mulipola, who has 20 home runs and 49 RBIs for the Wildcats this season, is confident the team is hitting its stride.

The junior catcher believes they can break through for Candrea, giving him his first appearance this spring in the Women’s College World Series since 2010.

“[This win streak] just shows that all the hard work that we put in is paying off,” Mulipola said. “What we've learned from the fall, where we were kind of off to a shaky start, has been put into season now. So, we're implementing everything that we've been learning throughout the other games that we played.”

McQuillin, who has a 17-5 record in the pitcher’s circle with a 1.23 ERA this season, vouched for this year’s team and their chance to do something special on the diamond.

“I think we're doing really well,” she said. “Obviously, I think our bats turned on a bit this weekend. I mean, we had them last weekend, but we really found them again this weekend and kind of continued our stride in the Pac-12 right now, and I think that that's what we need to keep doing moving forward.”

The Wildcats will look to build on their unblemished conference record on the road this weekend, playing California (24-22, 3-14) in Berkeley between Friday and Sunday, April 26 through 28.
Palomino-Cardoza believes the Wildcats have yet to scratch the ceiling of their potential, which could be nightmarish for the teams they’ll face down the stretch.

The redshirt junior outfielder believes the Wildcats have learned a lot from their close losses to perennial powers Florida, Florida State and Oklahoma—all ranked in the NCAA’s top-10—putting that knowledge to good use in conference play.

“I think those games really kind of showed us what kind of team we could be, and this team still has a way to go and I think that's what's really incredible,” Palomino-Cardoza said. “This isn't our best and when we're at our best, it's going to be scary.”