Courtesy of 191 Toole
Some of the fledgling bands that musician/record producer/songwriter John Vanderslice has hand-picked to accompany him on tour—Sufjan Stevens, Okkervil River and St. Vincent—went on to critical acclaim. Vanderslice holds court at 191 Toole. This time around, Meernaa occupies the opening slot. Details here.

Based on hundreds of photos from articles and amateur videos of the original Selling England By The Pound concerts—one of the first-ever multimedia performances—The Musical Box: A Genesis Extravaganza captures the surrealism of these shows that took place between 1973 and 1974. At the Fox Theatre. Details here.


“Who cares if you come from paradise or hell/Appalling Beauty, artless and monstrous scourge/If only your eyes, your smile or your foot reveal the infinite I love and have never known.” Full of dark, cold condemnation, Danish post-punkers Iceage commit acts of simony at Club Congress.
With South London alt rockers Shame and Pelada. Details here.

Northern California neo-soul/funk outfit The Gold Souls are at The Sea of Glass-Center for The Arts. Details here.

Gooch Palms, The Exbats and Feverfew are making an in-store performance at Wooden Tooth Records. Filling the shop with love. Details here. 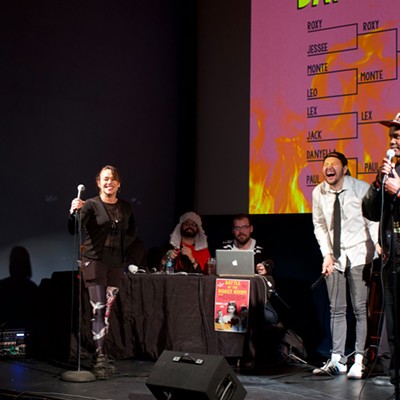 Eight Great Things to Do in Tucson Today: Thursday, April 18