The University of Arizona's Park Student Union, located at 615 N. Park Avenue, will undergo extensive renovations as part of its transition to a facility called the UA Global Center.

It is envisioned to be the one-stop shop for services provided by UA Global, a department that serves international students and faculty who are entering or leaving. Currently, UA Global's operations are spread out across campus, making it difficult to navigate.

As a consequence of the upcoming change, the university's entire student-run media department (which includes The Daily Wildcat, a weekly newspaper; UATV, a broadcast news service and KAMP Radio, a free-format AM radio station) will be displaced from their long-time headquarters along with a handful of other services.

While UA Space Management staff is working to find a new home for Arizona Student Media, the current newsroom was custom-built with 6,200 square feet of space to accommodate about 200 student media staff members, offices for full-time administrative staff, technological capability for large data transfers and more.

With limited free space on the main campus, finding a comparable replacement will be difficult.

According to a letter sent by student media leadership to UA President Robert Robbins on Tuesday, April 2, the staff at Arizona Student Media was only made aware of these plans at the beginning of the semester, and they are expected to move this summer, only a few months away. No one at the department was consulted before the decision was made.


“When it comes to how the school sees you, you hope that they see you as a respectable establishment, that you do good work and that you deserve to be shown the respect that you’ve earned over the last years you’ve been working. And they didn’t do that with us,” UATV General Manager Olivia Jackson told the Wildcat. “I would have loved it, when the talks were first happening … if the three leaders of student media had been brought into the conversation, brought to the table, so that way we could sit down and talk. But they haven’t even reached out to us.”

The letter in full:

We are writing you about an issue of grave concern to us. The Daily Wildcat, the university's student paper for 120 years, along with KAMP Student Radio and UATV Student Television, is slated to be relocated from our facility in the Park Student Union to make room for UA Global. As members and students of Arizona Student Media, we are deeply concerned that no suitable or comparable space has been identified for us and that the consequences — unintentional though they may be — could have a damaging impact on the student press and student media on our campus.

Although our facility in the Park Student Union was designed and built specifically for the Daily Wildcat, KAMP and UATV with input from students and staff from that era, we want to make clear that we understand that things change, priorities shift and we can accept the relocation. But we have an outstanding facility, and it was funded, in part, by a lot of donations from alumni and others. The Daily Wildcat Alumni Hall of Fame is housed here. The newsroom and our business areas are named for former advisers, all with funds raised from family and alumni. James E. Rogers, the Arizona Daily Star, the Marshall Foundation and the Center for Excellence and Ethics in Journalism join hundreds of other donors, mostly alumni, who have contributed over the last 15 years to our facility and programs.

So no, we don't want to move. But in the face of reality, we don't want to be unreasonable. All we ask is that we are not relocated to inferior space, that it be more or less equivalent in size and that it be convenient for our 200 student staff members to come and go. Most of all, our new space should be built out or remodeled to accommodate the challenging working needs we face in our reporting and editing, digital media and broadcasting. That's what we have now.

The professional staff at Arizona Student Media was only just made aware of these plans at the beginning of the semester, and we are apparently supposed to be moved by the summer. To be frank, the students of The Daily Wildcat, KAMP and UATV feel that this is an egregious oversight of our value and importance to the University of Arizona community. Student Media is our home. We work hard every day to ensure that our students, faculty, staff and community members are informed and represented through our coverage. This is where we learn, this is where we build our skills and this is where we fulfill our passions. We also bring the university national recognition, earning the highest honor in editorially independent college media — the Associated Collegiate Press’ Pacemaker Award — each of the past two years. Through this process with UA Global, we the students have been nothing more than an afterthought. While we will accept that we have to move, we refuse to be treated as though we don’t matter.

We know that you value the work of student journalists and appreciate what we do at Student Media every day. We need your help in ensuring Arizona Student Media has a future on our campus. We respectfully request your time to discuss the situation further. Thank you for your attention to our concerns. 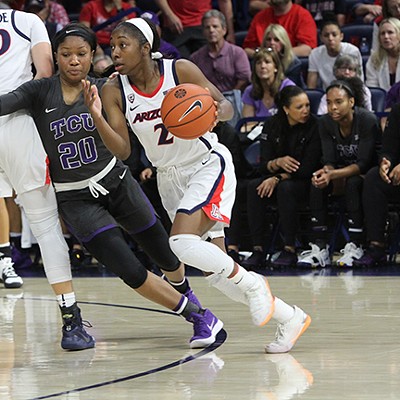