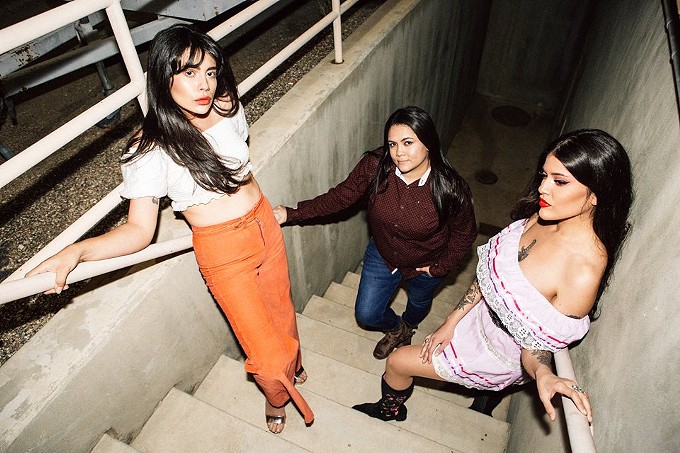 Hot on the spiked heels of Taco Sauce’s debut release, Original Hot—a freewheeling retro hell ride that navigates a few of the pitfalls faced by Generation Y-ers, including dating app hookups and the manipulative psychology of gaslighting—XOXO caught up with frontwoman Gabi Montoya to pick her brain. Saucy? Si señora, just like a worn pair of glitter splatter ankle boots.

Ok. Let’s start with “Swipe Left.” What is the backstory to that song?

I wrote “Swipe Left” a few years ago when I was single and doing the whole Tinder online dating thing. I was both amused and frustrated with how ridiculous it was. Most profiles were making stupid demands like, “you have to like this and if you don't, swipe left.” And, of course, the unsolicited nudes that Tinder is famous for.

What does the release of Original Hot mean to you?

Mostly, it means finally giving our friends and fans what they've been asking for at every show. It's really exciting because we built a big local following way faster than we could have imagined. Many people who came to our shows assumed we were already a well-established band. So, we finally get to use the momentum we gained over the last year and get our music into the hands of our fans. It's just so mind-blowing that we actually have people who have been waiting for this. We're really grateful.

Our live performances are engaging, surprising, sexy and oftentimes, pretty silly. Me and [bassist] Isabella [Rodriquez] enjoy teasing each other and making witty banter on stage.

Taco Sauce… Hmm. So, where did the name come from?

The name for the band was a combination of ideas. I like the word “saucy.” We thought something about tacos or Mexican food or Chicano culture would be fitting. And, very Tucson. Also, I think the name appeals to dirty minds, considering we're an all-woman band with queer members.

What about “Gaslight.” What was the inspiration there?

“Gaslight” came from reflection upon relationships with men in which I wasn’t, umm, shall we say, ‘satisfied.’ I realized that it’s still a very common tactic for men to blame women for aspects of their relationship that they're not happy about; essentially, gaslighting women into believing that the woman is the problem or the problem is all in her head.

Is Original Hot self-released or on a label?

Original Hot is self-released. The tracks were recorded at three different studios to help us experiment with finding our sound.

So, is there an album release party on the horizon?

Isabella and I are currently planning a summer tour. Our original drummer [Dessa Keys] left the band a few months ago. Now, Gaby Lisk is acting as our drummer. So, we're just trying to reorganize and figure out who we want to be going forward. We feel more free to do what we want. We aren't going to do a release party per se. But, we'll definitely treat all of our upcoming shows as a celebration of this new release.

All Bets Are On: Breaking Down the Sweet 16, Arizona Women's Basketball and the Sugar Skulls

Meet Some Authors This Weekend