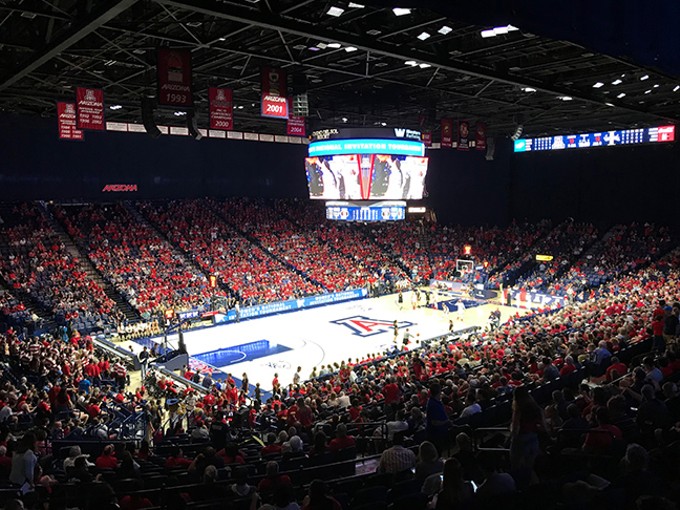 Christopher Boan
6,307 fans piled into McKale Center on Thursday night to cheer on the Wildcats.

A crowd of more than 6,000 people roared in unison as the final seconds drained from the center-court clock at McKale Center on Thursday evening.

The red-and-blue-clad fans that filled the arena were treated to a four-quarter duel between the host Wildcats and a spunky Idaho Vandals squad that never relented.

The two sides virtually matched each other shot-for-shot all night, with the Wildcats taking a 36-26 lead into the half, and a 48-39 advantage into the game’s final quarter.

The Wildcats buried the Vandals in the game’s final stanza, hitting 8-of-15 (53.3 percent) of their shots to clinch a 68-60 victory in the Women’s National Invitational Tournament Sweet 16.

The Wildcats’ victory came, thanks to an egalitarian offensive attack that saw four players score in double figures, with guard Aari McDonald leading the way with 18 points and 11 assists.

McDonald, who suffered a severe cut to her upper lip during a third quarter collision at midcourt, thanked her teammates for their perseverance against the Vandals.

The redshirt sophomore guard from Fresno, California said she never had any intentions of leaving the game after the injury, wanting to finish the game with her teammates.

“It's bigger than me, honestly. It's about my teammates obviously winning,” McDonald said. “So, I just have to suck it up and go back in and finish the game.”

The Las Vegas native believes a game like Thursday’s can serve as a turning point for coach Adia Barnes’ program, which is making its first postseason appearance in eight years this season.

“This is why we came here. We knew Coach Barnes was a new coach. She wanted to build a new program,” Thomas said. “So, it's great to see that we're actually starting that. We're making history here at Arizona.”

Barnes, who starred with the Wildcats during her four-year playing career in Tucson from 1994-98, believes that Thursday’s crowd, which was announced at 6,307, can be the start of a new era for the sport in Tucson.

The third-year Arizona coach, who’s guided the Wildcats to a 21-13 record to-date, believes the team’s success in the WNIT can draw new fans to McKale in the future.

The Wildcats will host the University of Wyoming Cowgirls at McKale Center in the Elite Eight round of the WNIT at 2 p.m. on Sunday.

Getting Wyoming in Tucson is a huge momentum boost for Barnes’ squad, with Wyoming sporting disparate results at home (16-2), versus on the road (6-5) this season.

Barnes is thrilled to have another home game to look forward to, challenging the crowd to buy 7,000 tickets for their Sunday clash.

She’s confident the fanbase will do just that, which shows Barnes how invested the city is in the team’s postseason success.

“That shows that they're supporting us, and they believe in us and what we're doing,” Barnes said. “And they're putting money into it so they're investing in us. And I think that's a big thing. It's just great momentum and I want us to feed off of that.”

All Bets Are On: Breaking Down the Sweet 16, Arizona Women's Basketball and the Sugar Skulls