Courtesy of The Rialto Theatre
Comprised of indie folk-rockers Phoebe Bridgers and Conor Oberst, Better Oblivion Community Center will be holding meetings across the United States and Europe. They welcome you to experience a healing sound bath. Live in concert at the Rialto Theatre. Sloppy Jane and Christian Lee Hutson lend their support. Details here.

Courtesy of Thadeus Gonzalez with Animate Echos Facebook event page
Comprised of New Orleans’ most promising young talent, The Willie Green Project represents the next generation of great jazz musicians to emerge from the birthplace of the genre. At The Sea of Glass Center for the Arts. Details here.
click to enlarge

Courtesy of The Sea of Glass

The Harm Reduction Benefit Show sees The Trees, Vasectomy, The Rifle, Cruise Ctrl, Flor de Nopal and Xochitl circling the wagons in support of the Syringe Access Program and other community based harm reduction efforts. At 191 Toole. Details here.

“Wham, bam, kapow!” The Rock is the site for this year’s The Battle For KFMA Day. Like Rock ’Em, Sock ’Em Robots, this year’s contestants—Pyrotechnica, Echoes, Like A Villain, Broken Romeo, exit.dream and Her Name Echoes—will attempt to knock each other’s block’s off to win an opening slot at KFMA Day 2019. Details here. 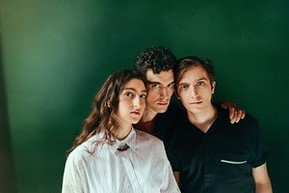 Courtesy of The Rialto Theatre
Can you hear the buzz? Inspired by literature and a love of language, classical and pop music these preternaturally gifted siblings recently sold out a headlining show at New York’s Bowery Ballroom without ever having released a song. The next day their first single, “I Was Wrong,” dropped and just as quickly it landed on Stereogum’s radar screen. The word was out. Their debut album Thrilled To Be Here (Fantasy Records) comes with a pedigree. It was produced by Grammy-winning John Congleton, who has worked with St. Vincent and the War on Drugs. Bailen stride chin up into Club Congress. Sweet Ghosts provide support. Details here.

Courtesy of Monterey Court Studio Galleries & Cafe
Explaining the origins of their name, rapper Issa Gold said, “I feel like the things that we do could be considered underachieving, like smoking pot. So, it’s just a flip on that. Even though technically we’re doing underachiever things, we’re bringing positive energy.” With more than 100 acts on six stages, The Underachievers headline the block party at Tucson Hip Hop Festival: Day 4 at 191 Toole. Details here.

The sultry sounds of Miss Olivia and the Interlopers waft through the air at Che’s Lounge. Details here.

Courtesy of Hotel Congress
During the Swing Era of the 1930s and ’40s, this erstwhile bandleader’s popularity was sustained by a matchless string of hits. The world famous Glenn Miller Orchestra keeps the spirit alive. At the Fox Theatre. Details here.

Grounded in the power of radical femmes, this event places the voices, talents, visions and dreams of liberation fostered by black, indigenous and people of color (BIPOC) who believe change cannot come from a system designed to perpetuate and profit from white supremacy, violence, toxic masculinity, homophobia, transphobia and the continued devaluation of our humanity. International Womxn’s Day Celebration takes place at 191 Toole. Details here.

Here are the Arizona Artists Performing at SXSW

XOXO: Where to Rock Monday, March 11