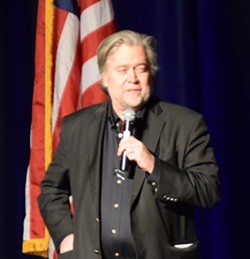 Danyelle Khmara
Someone is gonna make money on this wall deal.
Is there any chance we could seal them all in Biosphere 2 for the next hundred years? Politico reports the Trump gang may be descending upon Tucson:

With Congress refusing to pony up the $5.7 billion Trump has demanded for the project, his allies now are plotting to kick things off with private money and private land.

The idea, which began in December as a Florida man’s quixotic online crowdfunding campaign, is becoming something more, well, concrete. Big name Trump supporters like Bannon, a former Trump campaign and White House strategist, have flocked to the project. And they have initiated talks with the Israeli firm that constructed that country’s border fence with Gaza, the group told POLITICO. They expect to hold a town hall in Tucson, Arizona, as soon as Friday and to visit the border in Laredo, Texas, next week.

Charter School Reform Legislation: The Good, The Bad and The Unknown