The Reverend Horton Heat is coming to town and we have a last-minute giveaway for ya!

Enter for your chance to win a CD of the new album Whole New Life signed by the band.

One lucky winner will also win the grand prize of a vinyl record of the album and two tickets to tomorrow night's show at 191 Toole! (Wednesday, Jan 16 at 7:30 p.m.)

For the better part of three decades, that band has spotlighted an alt-music cult legend who is often confused for his band's name. That man is Jim Heath, who—alongside longtime stand-up bass thumper Jimbo Wallace—has entertained his legions of fans with tireless tours up and down the highways and byways of the United States and abroad.

Heath and Wallace, who have weathered the rotation of a few able-bodied double bass drummers over the past 30 years, have a new album, aptly titled Whole New Life, via Chicago-based Victory Records. The band's 12th studio effort—and first since 2014's REV—proves it's never too late to teach an old dog a new trick.

And if that's not enough, Heath has expanded his vocal range to add menacingly fun vocals that are more than road-tested and built for speed in higher registers.

Coming to 191 Toole with their latest incarnation, Reverend Horton Heat will be hitting the Tucson stage to showcase the new album and play old crowd favorites with the newly expanded line-up... 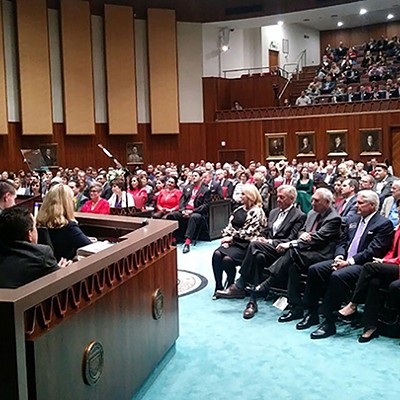 Four Great Things to Do in Tucson Today: Wednesday Jan. 16