Some of the Most Important Education Issues Facing Arizona (And One Item That Doesn't Make the List.) 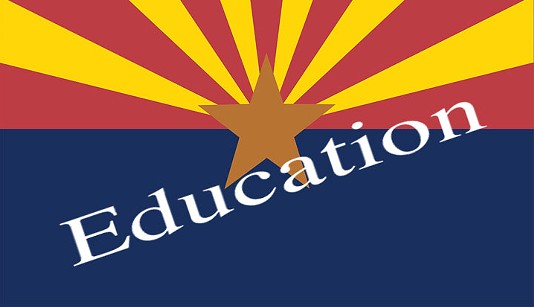 Let's see, what are the most important education issues facing the legislature this year? Fulfilling its promise to continue raising teacher salaries is definitely on the list. So is increasing charter school transparency and oversight to weed out rampant corruption and profiteering. And decreasing teacher shortages. And decreasing class sizes. And increasing education budgets so old buses can be replaced, old schools can be maintained and old textbooks and technology can be updated. And let's not forget ridding the state of its destructive English Immersion model for ELL students.

Other problems could be addressed as well, like, say, updating the Department of Education's computer data systems and fully funding the oversight and management of the ESA voucher program (Yes, those are important).

Any more? I know I've left stuff out, like increasing access to preschool and who knows what else. In a state that has shortchanged its children for so long, the list is almost endless.

But I know one issue that doesn't even make the top one hundred: getting politics out of the classroom.

So what has the media talked about nonstop for weeks? A proposed bill to get politics out of the classroom.

Yes, such a bill has been proposed. Yes, it would be a travesty if it passed. But no, it doesn't deserve all the attention it's been getting. (And yes, I'm fully aware that I'm giving it more attention by writing about it.)

Giving that much press coverage to a non-story uses up all the oxygen in the room. Substantive educational issues struggle to get the media attention they deserve.

The beneficiaries of the current feeding frenzy around this story are the anti-public education forces in the state, people who would rather not put more money into education or increase oversight of charter schools. The purpose of the legislation is to demonize teachers. It turns them into villains with a political agenda who are corrupting the youth of Arizona. So: "Why encourage the scoundrels by paying them more? Why give them even more money for materials to further indoctrinate our children? Let's get politics out of the classroom first, then we can talk about other education issues."

This is a calculated response to the #RedforEd movement which was far too successful in the eyes of conservative legislators and the powerful interests who support them. Despite early attempts by Governor Ducey and fellow Republicans to demonize the demonstrating teachers, they grew in political power and popularity the longer they stayed on the streets, and they still have the public behind them. The "politics in the classroom" bill is an attempt to turn the #RedforEd success story on its head.

I'm one of those people who believe history doesn't repeat itself; it rhymes. And to me, the current attempts to demonize teachers by claiming they're pushing their political views on our children rhymes with past attempts to demonize TUSD's Mexican American Studies program by claiming the teachers were churning out Latino students who hate white people and aspire to become bomb-throwing revolutionaries. Two Superintendents of Public Instruction, Horne and Huppenthal, rode their anti-Latino, anti-MAS campaigns into office. As an added bonus, when the anti-MAS story dominated the news, it pushed genuine educational issues off the table.

This year, Red Is the New Brown. RedforEd is the current version of the old "Scary brown people are taking over our schools" story.

Trump has been wildly successful at controlling news cycles by getting the press to obsess over the batshit crazy things he says and ignore more important, more substantive matters. If Arizona Republicans are smart and media savvy, which they tend to be, they'll employ a similar tactic. Realizing that the "politics in the classroom" story is catnip for journalists, they'll bring it out whenever they need a bright, shiny educational object to dangle in front of the media, turning their attention away from more pressing educational issues in the legislature.

It's possible this story will disappear when the legislative session begins. Maybe the bill will die in committee and never be heard from again. But it's also possible — I'd say probable — that anti-public school conservatives will milk it for all it's worth. Stay tuned.

A "The Star Takes the Bait" Extra. Monday, December 31, The Star featured a story about the "Politics in the classroom" bill on its front page. Well, everyone else did it, so why not our local daily? But the editors decided that wasn't enough. On the front page of the Tucson & Region section, they doubled down with a story about two teachers who were fined for political advocacy on school time. First, a story about the bill on the front page, then a story suggesting we really do need the legislation to stop all these nasty teachers from pushing their political views on our kids.

The accusations against the teachers were a purely political move. They barely deserved a mention. The teachers' violations were about as insignificant as a pedestrian stepping into the street before the light turns green. But The Star featured the story anyway, creating a one-two, anti-teacher punch in its Monday edition.

The story came from the AZ Republic, which had run an excellent, important investigative series on charter school corruption and profiteering, which the Star didn't see fit to print. But this trivial story about a couple of teachers behaving badly (even though they didn't actually behave badly)? That, the editors decided, is a story that needs to be told.