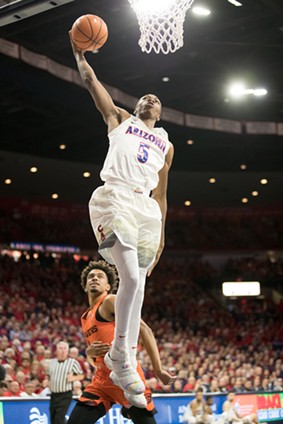 Stan Liu | Arizona Athletics
Sophomore forward Brandon Randolph throws down a dunk against the University of Oregon during his freshman season on Jan. 13, 2018.
The tone of Wednesday's clash between the Arizona Wildcats and visiting Montana Grizzlies was decided on a thunderous dunk by Arizona forward Chase Jeter.

Jeter, who finished the night with a game-high 21 points, caught the skyward pass by teammate Brandon Randolph, before throwing it down, to the delight of the 14,000 or so in attendance.

The exploits of Jeter and Randolph were enough to carry the Wildcats (8-4) to victory, 61-42, snapping the Wildcats' two-game losing streak, one home and one away.

It was a night of stifling defense and sloppy ball-handling, with each team committing 16 turnovers and the Grizzlies shooting a meager 26.9 percent from the field.

It was a result that longtime Arizona coach Sean Miller appreciated, calling his team's defensive effort one of the best he's seen all year.

"The one thing you try to have a gauge on is how hard your guys play," Miller said. "Our guys gave it everything they have tonight. Montana didn't have a bad night. They are a very good basketball team, but we worked really hard defensively and made it tough."

Miller admitted that he wasn't sure how his team would respond to the team's 58-49 loss to the Bears last Saturday, a defeat that snapped the team's 51-game non-conference home winning streak.

"Coming off the Baylor game you don't really know what to expect. We were connected and a lot of guys did a great job," Miller said.

The Wildcats really only needed Jeter and Randolph on Wednesday, with the two combining to score 35 of the team's 61 points, with no other Wildcats scoring in double digits.

Jeter believes the team has turned a corner on both sides of the ball from their losses to Alabama on the road and the Bears at McKale.

The Duke University transfer is hopeful that their victory against a quality Grizzlies squad can jumpstart the rest of their season, ahead of their final non-conference game, against the University of California-Davis at 5 p.m. on Saturday, Dec. 22.

"The main thing was to just keep positive and not let two losses define the rest of our season," Jeter said. "I think Montana was a good team and it was a big win for us tonight." 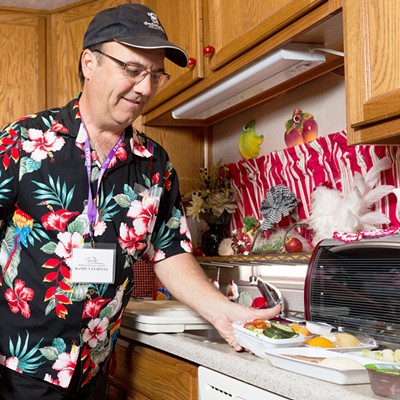