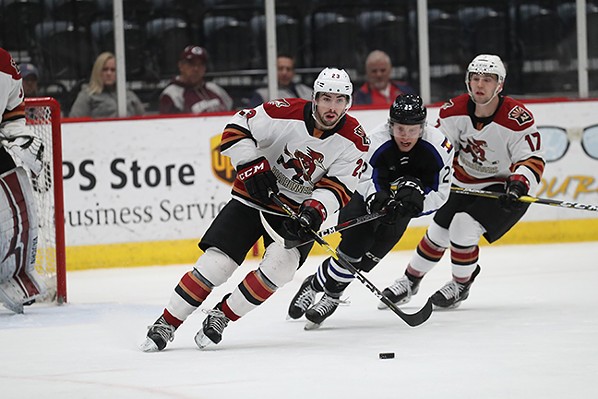 Chris Hook
Roadrunners defenseman Kyle Capobianco skates down the ice after the puck on Wednesday, Dec. 12.
It was a night of fits, starts, and missed opportunities for the Tucson Roadrunners last Wednesday evening.

The Roadrunners (15-6-2), struggled to crack the swarming defense posed by the visiting Colorado Eagles, resulting in a 2-0 loss on home ice.

The two sides slogged through the opening period, with neither team able to crack the scoreboard, before the Eagles struck first with just under eight minutes left in the second period.

The opening goal, scored by Colorado forward Logan O’Connor, was all the Eagles needed, with Colorado goalie Spencer Martin turning away each of the Roadrunners’ 22 shots.

The home side struggled to find much offensive consistency, thanks, at least in part, to the seven penalties they committed.

First-year coach Jay Varady summed up the home side’s frustration, calling the Roadrunners’ loss a head-scratcher for all involved.

“I didn't really like how we played,” Varady said. “I thought we were undisciplined. We were in the box too much, and then chasing the game … I thought they did a great job killing penalties, but we were just in that situation too much for things that we shouldn't be doing.”

The Roadrunners had several prime scoring chances in the game’s final period but couldn’t find a way to get one past Martin.

Team captain Dakota Mermis voiced his frustration with how the team played against the Eagles, which Tucson split.

“That one stings,” Mermis said. “Both of the games here this series, there wasn’t a lot of consistency. A lot of penalties both ways. It’s hard to get into a flow when you’re killing penalties that much and unfortunately, we just couldn’t get it going tonight.”

Wednesday’s loss took the shine off the Roadrunners’ eight-game point streak, where they earned either an overtime loss or a win.

Tucson remains in a tie with San Jose for first place in the American Hockey League’s Pacific Division, with each team collecting 33 points to-date.

A high-note for the Roadrunners on Wednesday was the long-awaited season debut of forward Nick Merkley.

Merkley suffered a serious knee injury in March, keeping him off the ice for an extended period of rehabilitation.

Merkley described his long offseason, saying it was a relief to finally return to the ice, getting his legs back under him.

Being away from the sport for eight months was a tough reality for the veteran forward, grinding away to get in game shape.

“I think mentally it's pretty tough, I mean it's kind of a long process, you've got to stick with it,” he said. “It was nice being around the guys and got in that environment, but yeah it was a good experience. I think I'll be better for it.”

“He's a talented player, he made some plays tonight, I think as he continues to get in the rhythm of the game, he'll be making more plays throughout the course of it,” Varady said. “So, I think it just gives you another weapon, another look, another right shot.”

Three Great Things to Do in Tucson Today: Wednesday, Dec. 19

By Julián Aguilar, The Texas Tribune and Perla Trevizo, ProPublica