In The Flesh: The Juilliard String Quartet Bears Gifts 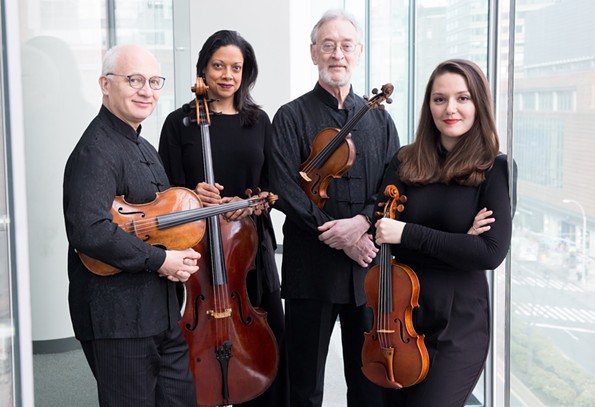 Claudio Papapietro
The Juilliard String Quartet
Tucson was gifted with a pre-Yuletide performance by the world-renowned Juilliard String Quartet last Wednesday, Dec. 5. Taking the near-capacity audience at the Leo Rich Theater through the gamut, from pianissimo to fortississimo, at times galloping furiously in mellifluous harmony and, at others, building tension. Playing off the intentional push/pull of contrapuntal discord, crescendo followed by diminuendo, they stewarded the music to dizzying heights until allowing it to rupture into sharply pointed spires.

Formed in 1946, as the quartet-in-residence at the Juilliard School, this lauded assemblage perdures. The present incarnation consists of cellist Astrid Schween, violist Roger Tapping, second violinist Ronald Copes and Areta Zhulla, the most recent violinist to occupy the first chair. Its forebearers’ intent: “To play new works as if they were established masterpieces and established masterpieces as if they were new.” These descendants stayed true to the mission statement.

Teetering between consonant and dissonant harmonic intervals, creating tension that leaves the ears of a Western audience longing for resolve, the Juilliard String Quartet explored during Lembit Beecher’s One Hundred Years Grows Shorter Over Time.

“The movements of this quartet are like successive generations retelling the same story. As I wrote, a melody kept coming into mind: A waltz written by my Estonian grand-uncle in the 1950s. I first played this music with my brother when we were teenagers. Over the years we kept returning to it. The waltz appears fully realized, as if an old recording,” Beecher said of his piece.

Schween provided contrapuntal anecdotes while Tapping and Copes sautilléd their bows off the strings in powerful unison leaving Zhulla free to soar.

After the intermission, the Juilliard String Quartet returned for Joseph Haydn’s String Quartet in F Major, Opus 77, No. 2. It seemed fitting to close the program as Haydn is widely considered the creator of the genre. Achieving delicate equilibrium, they masterfully created sublime contrast between the galant style of the 18th century and the dignified seriousness of the Baroque.

Executed as by the unfailing hands of surgeons, over the course of the evening, the Juilliard String Quartet performed with barely containable ardor—that at moments impelled their bodies to rise upward from the benches and chairs they sat upon—displaying unparalleled artistry, effortlessly laying claim to a shared sovereignty as one of the world’s finest.

Claytoon of the Day: Baby, It's Politically Correct Outside