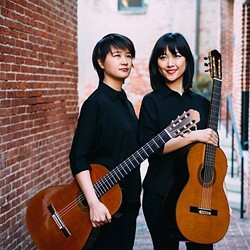 Their debut CD Maracaípe received a Latin-GRAMMY nomination. It was dedicated to them by Sergio Assad, a Brazilian guitarist and composer.

The duo has performed throughout Europe, Asia and North America in countries such as Germany, Russia, Spain, Portugal, Denmark, Poland, China, Panama and the United States with their mentor, Manuel Barrueco.

Meng Su and Yameng Wang were born in the city of Qingdao, China, and have packed great musical success in their young lives.

Before they performed as a duo, they both made solo recordings. This duo is currently supported by the Maryland State Art Council’s Touring Artists Grant program, and has been since 2014.