Sinema: "I’m Honored That Arizonans Chose Our Vision of a Better Arizona" 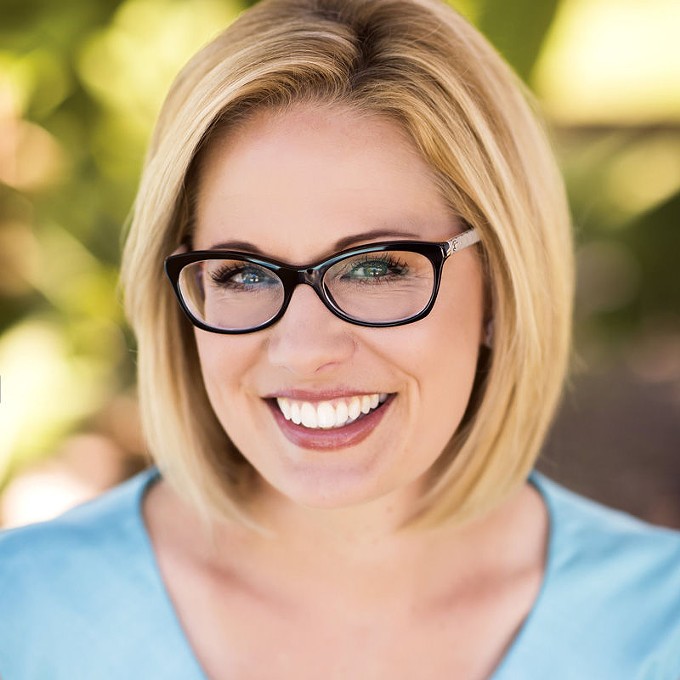 Courtesy
Kyrsten Sinema
Congresswoman Kyrsten Sinema's prepared remarks tonight as she made a victory speech after being declared the first Democrat to win a U.S. Senate seat in Arizona since U.S. Sen. Dennis DeConcini called it quits in 1994:

Hello, everyone! Thank you so much for being here.

I’m honored to be here today with Arizona veterans - the brave men and women who have worn our country’s uniform. Today, and every day, we honor their service and sacrifice. They’ve given everything to protect our freedoms and our democracy, and it’s because of them that we are here today.

I’m grateful to all veterans and servicemembers - including my brothers, Paul and Sterling, and my opponent, Congresswoman McSally.

We launched this campaign because Arizona veterans and all everyday Arizonans deserve a leader who will fight for them in the United States Senate. Together, over the last 13 months, we have accomplished something incredible. We’ve talked to and engaged more Arizonans than ever before.

We did this because voting is a fundamental part of our democracy. Our country is its best when everyone is engaged and everyone’s voice is heard. That work isn’t over, and we will continue to make sure every vote is counted.

I’m honored that Arizonans chose our vision of a better Arizona. Now, it’s time to get work.

Arizonans had a choice between two very different ways forward — one focused on fear and party politics, and one focused on Arizona and the issues that matter to everyday families.

Arizonans rejected what has become far too common in our country: name calling, petty, personal attacks, doing and saying whatever it takes just to get elected. It’s dangerous, and it lessens who we are as a country.

We can articulate our own opinions and beliefs without believing or saying that someone else's are therefore wrong. We can embrace difference while seeking common ground.

As I head to serve our great state in the United States Senate, I pledge to double down on this approach. During my six years in Congress, I’ve tried to be a cheerful warrior, willing to work with literally anyone to get things done.

I’ve tried hard to help others see our common humanity and find our common ground. I’m proud of how this approach has worked. We’ve delivered real results for families, veterans, and business in Arizona.

During this campaign I have been honored to meet with thousands of Arizonans in their workplaces, in coffee shops, in neighborhoods. Listening to their stories reminded me each and every day why we do this work and how much is left to do.

One of the very first Arizonans to join our campaign was Leo. Leo is a proud Air Force veteran who served our country with honor and dignity. Today, he’s battling cancer. In between chemo treatments, he spent his time calling Arizona voters because he knows firsthand how much is on the line.

A woman named Michelle from Glendale recently shared her story. Her son was born with one kidney and she’s worried about how she will afford his care if we lose protections for pre-existing conditions.

In Tucson, I met Anne. Her husband is a disabled veteran. He served in Vietnam and has lived with the affects of Agent Orange ever since. It is our responsibility as Americans to make sure every veteran gets the care he or she deserves.

This campaign was about Leo and Michelle and Anne and all the other everyday Arizonans who are sick and tired of the dysfunction in Washington and who want leaders who put aside party labels and focus on just getting things done.

As your Senator, that’s exactly what I’ll do. Not by calling names or playing political games, but by showing up and doing the work to keep Arizona moving forward.

A few months ago, we lost a legend who exemplified that spirit and all the best of Arizona. His example shines a light on the way forward.

Sen. John McCain stood for everything we stand for as Arizonans: fighting for what you believe in, standing up for what’s right even if you stand alone, and serving a cause greater than one’s self.

Sen. McCain is irreplaceable, but his example will guide our next steps forward. He taught us to always assume the best in others, to seek compromise instead of sewing division, and to always put country ahead of party.

It’s up to us to carry on Sen. McCain’s legacy.

Almost everywhere I go, I’m asked a variation of the same question - how did our country get to this place, and how can we make it better? Sometimes the question is targeted towards Congress - how to get elected officials to break the gridlock and work together. Sometimes the question is about the television commercials - how to get the ugliness to stop. But in each question, the root is the same. What has happened and how can we fix it?

Our challenge today is to heal the rent in our country’s fabric, to come together as a people and as a nation, to set aside our minor differences and unite around our love of country and its fundamental freedoms guaranteed by our great constitution.

Senator McCain said “But we have always had so much more in common with each other than in disagreement. If only we remember that and give each other the benefit of the presumption that we all love our country we will get through these challenging times.”

It won’t be easy, and it won’t happen overnight, but we can work together to meet the challenges our country faces. We can do this differently. For our country, for our future, for Sen. McCain, and for each other I think we must.

Congrats to @kyrstensinema. I wish her success. I’m grateful to all those who supported me in this journey. I’m inspired by Arizonans’ spirit and our state’s best days are ahead of us. pic.twitter.com/tw0uKgi3oO

Three Great Things to Do in Tucson Today: Tuesday, Nov. 13