Women Account for 39 Percent of Arizona Ballot, Among Highest in Nation 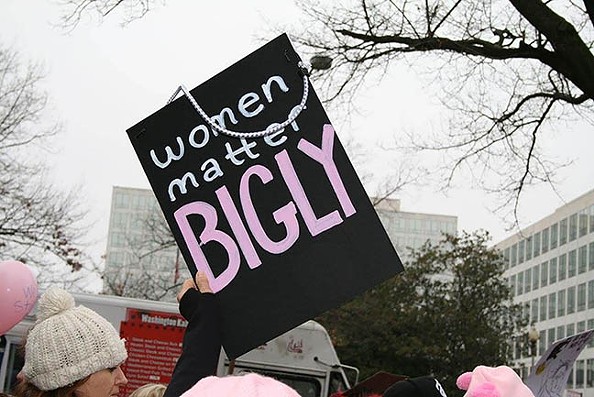 (Photo by Alexis Egeland/Cronkite News)
A record 39 percent of the candidates on Arizona’s ballot Tuesday are women, mirroring a national surge in female candidates that many believe started with the Women’s March the day after President Donald Trump’s inauguration in January 2017.
Anita Malik had never run for political office before, but the aftershock of the 2016 election – including the #MeToo movement and the Brett Kavanaugh hearings – pushed her to get her name on the ballot.

“Everything that was going on just made me want to step in and take that on,” said Malik, a Democrat, of her decision to challenge four-term Rep. David Schweikert, R-Fountain Hills, in a district where registered Republicans outnumber Democrats by almost 70,000.

Malik is one of 90 women on the ballot for state or federal office in Arizona this year, accounting for a record-setting 39 percent of the candidates in the state.

That mirrored a national trend in what many national organizations have said would be the Year of the Woman in elections. Cronkite News was able to review ballots in 44 states and found that the number of women running for office ranged from 20 percent in West Virginia to 42 percent in Hawaii.

Most were above 30 percent and Arizona trailed only Hawaii, Oregon, Nevada and Rhode Island for the prevalence of women on the ballot.

In Arizona, the numbers have been steadily rising from 1974, when women made up just 14 percent of the candidates on the ballot. The change is most easily seen in the race to replace Sen. Jeff Flake, R-Arizona, where Democrat Kyrsten Sinema and Republican Martha McSally are vying to become the state’s first female U.S. senator.

“For too long, the American government has largely been ruled by old white men,” Rose said. “And old white men can tend to take a country club approach, a business as usual approach, and not appreciate or address issues of import to more than half the public.”

Rose said the influx of women would bring more moderate policies and a shift in priorities that could potentially bridge the gap between some more divisive political groups.

League of Women Voters CEO Virginia Kase said that the number of women on the ballot this year shows a clear trend of women “starting to realize that they can have it all.”

“They can be a mom, they can be a wife, they can be all of those things that they want to be, and be a great political candidate,” Kase said. “I think that that’s something that we’re starting to see more than ever before.”

But for Meghan Kelly, a Democrat running her first race against a Republican incumbent in the Delaware House of Representatives, the inspiration to run came when a male colleague tried to make a pass at her at work. She said she asked for professional help and he tried to initiate an intimate relationship with her.

“This is not a man’s world,” she said. “It’s our world to share, and men need to learn to respect and honor women too.”

Malik, likewise, said she ran to stand up for women’s rights.

“Really, women have almost become ‘the other’ again for this administration,” she said. “The idea of attacking women’s rights all across the board and just attacking women as a different class is unacceptable, and it put women in a place of, you know, ‘This is not OK.'”

Kase said the increased number of women on the ballot is likely to lead to more female office holders after Election Day. She sees that as a step in the right direction for the women’s movement as a whole, and the beginning of an exciting trend.

“There are always these little anthills … but sometimes those anthills feel like mountains for women,” Kase said. “But what we’re realizing is that we can overcome any obstacle that gets in our way, and we can move those mountains aside.”

Malik said that whether she wins or loses Tuesday, she does not think this will be “just a blip” in her life. She plans to stay involved in politics, whether that means running for office again or just getting more involved politically, and she expects the same in the rest of the country.

“I think 2016 really woke women up and fuelled that flame of, ‘You know what, if you’re not going to represent me, then I’m going to go ahead and do it,'” Malik said. “So this was the starting point, but it’s definitely not the ending point.”