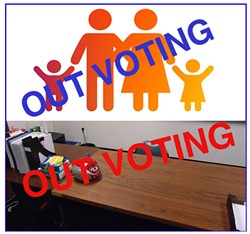 This is my final pitch, as the emails I got asking for more money the day before the election say. (More money? Really?)

Vote! I don't have to pitch that. If you've voted, great, if you haven't, do it Tuesday. However, voting for education can use some pitching, so let me give you a pitch based on personal experience.

I taught for over 30 years, high school English and a few other things (Photography, Yearbook). That means well over 3,000 students passed through my classroom doors. So I've been there, done that. I've been out of the game for quite some time, so I no longer have a dog in the hunt. I reap no personal rewards from your education-related vote.

Here are a few things I learned over the years beyond techniques and strategies that helped me become a better teacher. Money matters. Morale matters. Both will be improved by electing people who support public education.

Salaries matter. Salaries need to be in line with teachers' educational attainment and their importance to the community, and at least high enough teachers aren't frantic a week before the next payday. Nuff said.

Class size matters. My experience is, I can take in an entire class of 25 students, treat each student as an individual, pay attention to them and help them along when I think they need it. I can even remember the essence of what they wrote on their last few essays well enough to talk with them about their work without looking at their papers or my grade book. Add one more student above 25, and someone gets lost. Add 5 to 10 more, and students' individual outlines grow blurry. I start thinking, "I'm really glad those 3 [5, 10] kids are so quiet and don't need my attention so I can focus on everyone else," instead of, "I've got to make sure to get around to those quiet kids, make regular contact so they know I'm thinking about them and ready when they need something." As class size climbed beyond a reasonable number, my effectiveness diminished.

Lowering class sizes takes money. In a high school like the one where I taught with over 100 teachers, you need to add three teachers to lower everyone's class size by one student.

Supplies and equipment matter. Once upon a time, I got $1,000 from a grant to buy books for my class. I used most of it to buy enough copies of a paperback to check one out to every senior in my classes, filled with quality short stories from all over the world. I had some money left over, so I went to Powell's Bookstore (that's a luxury you have when you teach in the Portland, OR, area), and bought a bunch of individual short story collections from a variety of non-European countries. We spent three weeks on world lit, with each student choosing stories to read, then informally talking about them with the class. It opened lots of student minds to other countries and cultures as well as the different approaches to fiction employed around the world.

The unit wouldn't have happened If I didn't have some extra money lying around. Neither would the school's early-adopter computer lab with enough Mac Classics for a class to sit in front of individual computers and explore word processing and the internet before computer ownership and use became common.

Morale Matters
It used to be when I told people I was a teacher, I'd hear a quiet "Huh!" or see a slight shift in posture that showed me they were impressed. My stature raised an inch or two in their eyes. When I said I taught high school English, they said things like, "I don't know how you can deal with all those teenagers," or, "English? I'd better watch what I say." Parents of my students treated me with deference as well, and not just because I held their children's grades in my hands. I was a person worthy of respect because of my chosen profession. It felt good. I think, in subtle ways, it made me a better teacher.

That changed sometime in the 1990s. My saying I was a teacher was met with a shrug, sometimes with a touch of derision. I started hearing how teachers made too much money for too little work, how they had cushy government pensions, how they weren't doing a very good job because graduates were barely educated and weren't willing to work hard when they got out into the real world.

Respect for the teaching profession had been shrinking since the Reagan administration put out the anti-teacher, anti-public school report, A Nation at Risk. The drumbeat was picked up by anti-big government conservatives who loved to talk about "failing schools" and "failing teachers."

It took a while, but sometime before the turn of the century, the country's attitude toward public schools and teachers turned sour. Instead of supporting and working with schools, state legislatures adopted a "put up or lose funding" attitude toward school districts. Districts clamped down on school administrators, demanding better performance without saying how it should be done. Principals passed their stress onto teachers. When No Child Left Behind brought wall-to-wall high stakes testing, teachers felt they were under siege.

Nothing about the public's negative attitude toward teachers or tightening  the screws on schools or the obsession with standardized testing made things better. All they succeeded in doing was lowering the morale of teachers — probably students too — which had to take a toll on teacher effectiveness while it drove teachers out of the profession and students out of schools of education.

More support for public schools, both in money and morale, will improve schools and benefit students. Voting education will take us a step in that direction. Three Great Things to Do in Tucson Today: Tuesday, Nov. 6