Three and Out: Khalil Tate and Arizona host Colorado in Friday night showdown 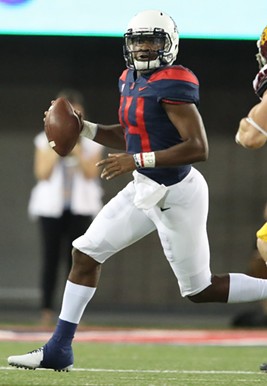 Arizona Athletics
Arizona quarterback Khalil Tate readies a throw against the University of Southern California on Saturday, Sept. 30.
Welcome to the home stretch of the college football season, better known as the time when Arizona football jumps out of the bushes to ambush unsuspecting pray.

That's exactly what happened to the Oregon Ducks a week ago at Arizona Stadium.

The Ducks, who entered last week's contest with a 5-2 record and a spot in the AP top-25, fell flat instantaneously, with junior QB Khalil Tate hitting generational wide receiver talent Shaun Poindexter for a 22-yard touchdown some 3 minutes and 52 seconds into the evening.

The Wildcats never let off the gas, torching the Ducks' staunch defense to the tune of 276 rushing and 189 passing yards in a 44-15 Wildcats win.

Fast-forward some 144 hours, and the Wildcats are back within the concrete walls of their home stadium, with a wounded Colorado Buffaloes squad toeing the opposing side.

The Buffs of Boulder enter Friday night's contest on a sour note, after somehow choking away a surefire win at home against Oregon State.

The Buffaloes entered the final quarter of that game with a 31-10 lead, against a Beavers team that entered with 22-straight conference road losses.

The Buffs left with a 41-34 sucker-punch of a loss, with the Beavers clinching the victory in overtime on a one-yard rushing touchdown by Jack Colletto.

Colorado coach Mike MacIntyre succinctly summed up the team's take on the defeat in his postgame comments, speaking to the growing chaos that's engulfing the Front Range university.

"I guess you'd call this a gut-wrencher," he said.

Call that the understatement of the year. The Buffs have gone from a darkhorse College Football Playoff darling that started the year 5-0 to a woebegone mess that might miss out on the bowl season entirely.

The reason for the about-face is the team's three-week plunge to Colorado's traditional irrelevancy on the national football stage, losing to USC, Washington and Oregon State in succession.

The first two defeats are understandable, given that the Buffaloes faced each on the road. The third and final defeat warrants the type of hand-wringing that's blown up in the mountain town.

Things won't get any easier for the Buffs this week, with the Wildcats sitting at 4-5 for the year and in need of winning two-of-three to make the postseason.

The home side's fate hinges on whether sophomore back JJ Taylor can continue his torrid pace, after torching Oregon, to the tune of 212 yards on 30 carries, with two touchdowns in the blowout victory.

Arizona's Kevin Sumlin believes Friday will be difficult for his players, but believes his players will gain confidence from their strong outing against Oregon last week.

"They’re doing a lot of things right. It’s going to be another real challenge, this week, Friday night," Sumlin said.

Arizona is 5-2 against Colorado since they joined the Pac-12, including last year's 45-42 win in Boulder.

You may remember that game being Khalil Tate's coming-out party, where he ran for an FBS quarterback record 327 rushing yards on 14 carries, with four scores.

Tate did all that, despite Brandon Dawkins playing much of the first half. Tate seized control of the offense then and there, putting up an October that no one in Tucson will forget anytime soon.

Whether MacIntyre's bunch will exact a measure of revenge, while clinching a bowl berth in the process, remains to be seen.

Expect an old-fashioned bloodbath between the trenches in primetime on Friday, with both sides punching each other in the mouth, figuratively, at least.

How to Watch: Fox Sports 1 is airing Arizona's game with Colorado on Friday, with kickoff scheduled for 7:30 p.m. Arizona time.

How to Bet: Vegas has Arizona as a three-point favorite to beat the Buffaloes. The over/under is 56.5, as of Thursday morning.

Who to Watch: The Buffs have one of the best QB/WR combos in the nation, with junior gunslinger Steven Montez throwing for 2,083 yards and 14 touchdowns this year. The man to watch is sophomore wideout Laviska Shenault Jr., who has 60 catches for 780 yards and 6 touchdowns this season. Shenault was a Heisman contender before injuring his toe against USC, but remains one of the best wideouts in the nation. He should challenge whichever Wildcat has to cover him on Friday evening.

Score Prediction: My heart tells me to go with the hot hand and pick Arizona, but my brain tells me that Colorado is going to come in angry and throw a night of haymakers at a wobbly Wildcats defense. I'm going to have to go with the latter, with Colorado beating Arizona, 31-28.

Claytoon of the Day: Purge To The Moon