Arts and Culture Fun in General The Weekly List

Next week in Laughing Stock, favorite Tucson storyteller Molly McCoy interviews Maria Bamford, star of the Netflix series Lady Dynamite. Bamford headlines this year’s Tucson Comedy Arts Festival, hosted by the Tucson Improv Movement. The fest runs from Wednesday through Saturday, Nov. 7 through 10 at TIM Comedy Theatre, 414 E. 9th Street, between Revel and The Coronet. Bamford performs at the Rialto Theatre at 8 p.m., Saturday, Nov. 10. Tickets are $27 to $34 at rialtotheatre.com. For another $25, you get a pass to the whole festival.

Go ahead and get the $25 pass. Admission is $5 per show, but the pass guarantees a seat for all 36 acts that aren’t Maria Bamford. The theatre only holds 45, so you’ll want that guarantee to see your favorites. Passes and single-show tickets are at tucsonimprov.com, or you can opt to get your pass with your Bamford ticket.

TCAF 2018 includes an expanded stand-up lineup, and sketch and improv performers from New York, Chicago and Los Angeles, as well as Tucson, Phoenix and Flagstaff. Artistic director Daniel Kirby says, “We try to create opportunities for as many different types of comedy as we can. Diversity was our goal for this year.”

Comedian Wynter Spears is one example. A veteran stand-up comic, she began her career in Chicago and now lives the dream in top Los Angeles clubs. She also features regularly at women’s comedy festivals, and this year was tapped for The Second City’s Diversity in Comedy Festival.
TIM’s Como Se Dice bilingual team also recently performed at that festival and is featured in TCAF’s
click to enlarge 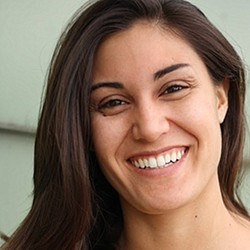 The Saturday, Nov. 10 lineup includes former TIM company member and Tucson radio personality Mishell Livio, the creator and executive director of the groundbreaking Hispanic Diversity Ensemble Generation LatinX in Chicago. She improvises with Kate Parker (of iO Chicago’s Improvised Jane Austen) as You and Me Against the World.

“Really, all three teams in the (6:30 p.m.) Saturday improv slot will be great,” Kirby says. “I am excited to see Brian James O'Connell and Neil Gargulio of The Pack Theater in L.A. They have a specific improv philosophy that I am not familiar with. It's always exciting to see a different style of improv.”

O’Connell and Gargulio perform as Garguilo'connell in the Saturday improv show. Rounding out Saturday’s lineup is PUMPS, an iO West house team from Los Angeles that may be the most prestigious in TCAF’s four-year history.

Kirby says, “Performers from LA and Chicago are bringing both diverse styles of improv and diverse types of performers.”

Laughing Stock especially looks forward to the Tucson debut of Chartreuquoise, a long-form duo comprising Eric Rau, who performs with both Tim and Unscrewed Theatre, and his husband, Cameron, a mainstay with Laughing-Stock-favorite Musical Mayhem. The pair was recently featured at the Red Rocks Comedy Festival.

Phoenix’s esteemed Torch Theatre is represented by VerizonQuest, the duo of Marisol Chavez and Jose Gonzales, who both teach at that theater’s improv school. 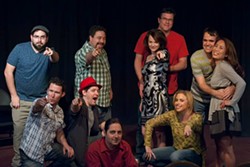 Phoenix sketch comedy team, The Cosmonauts.
Kirby says the Arizona acts bring particularly strong energy. “I think they want to create a greater, more respected comedy culture in Arizona. With groups from across the state participating, we can all learn from each other and make the Arizona scene richer. What makes TCAF so cool to me is that, especially with improv, we are seeing the evolution of the prevailing comedic sensibility in real time. SNL has pulled cast members from Second City for years, and recently, from other improv comedy theaters like UCB, iO, etc. (But) for example, current SNL cast member Aidy Bryant credits Bill Binder (co-founder of The Torch Theatre in Phoenix) for introducing her to long-form improv. By watching improv and other live comedy today, you can peek into how the comedy arts are changing!”