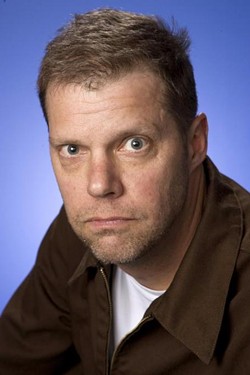 “I first did comedian karaoke when Joel Martin had a show at the now defunct BZs pizza bistro,” says Comedy at the Wench honcho Roxy Merrari. "I had a blast!”

That experience inspired Died Laughing, a costumed mash-up of famous comedians’ material impersonated by popular local comics. The fun starts at 7 pm., Monday, Oct. 29 at the Surly Wench Pub. Admission is by donation.

“It's not actual karaoke,” says Merrari. “We are doing these people's material live based on recordings. There is magic in seeing legends sharing a stage for the first time.
Just to suspend disbelief and hear the jokes live, so much brilliance from 50 years of beloved comedy legends is a treat.”

Comedy at the Wench has few boundaries but host Merrari is always in control.

“There are no off-limit topics in my book,” she says, “but there is a line where a joke disrespects the venue, the host, the patrons, and fellow performers.”

Cross that line and any comic gets the boot.

The Return of the Unbookables

Roxy’s standards of decency set a low bar, but Andy Andrist and Kristine Levine, Joey G’s guests for Comedy at the Mint on Tuesday, Oct. 30, occasionally blow right through it.

The pair were among a handful of raucous comics Doug Standhope sought out for a benighted foray into the dark side of comedy touring with a remarkably soft underbelly of friendship and caring. The Unbookables, Standhope’s notorious 2012 documentary from that tour was re-released on DVD in June.

Levine is a popular Tucson comedian best known as an on-air personality on The World Famous Frank Show on 96.1 KLPX.