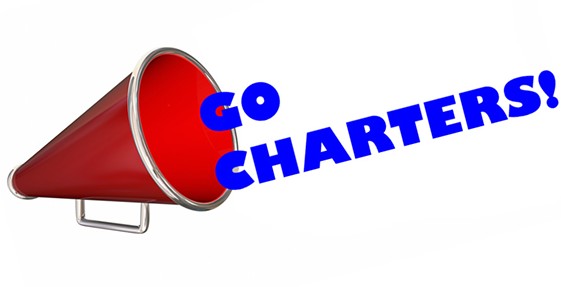 According to an AZ Republic article which gives off only the faintest odor of skepticism, we're about to get significant improvements in Arizona's charter school oversight and transparency courtesy of all those people who have shielded charters from oversight and transparency in the past: Republican legislators and statewide officeholders. We're supposed to believe the people who have always coddled charters and condemned school districts are going to take charters to task for their corruption and profiteering. And they'll do it after the elections are over, when they have a years-long window before they face voters again.

If you believe that, I've got some beach-front property in Marana you can buy with all the money you get back from Trump's middle class tax cuts.

The Republic article begins with the Arizona Charter Schools Association, the state's biggest cheerleader for charter schools, which is very influential in state Republican circles. After seeing all the bad publicity charters have gotten from recent investigative reporting, Eileen Sigmund, the association's CEO, has decided it's the right time to say, some changes should be made.

In 2016, the ACSA got a $1.6 million grant from the Walton Family Foundation. It's a yearly contribution from the multi-billionaire family which owns Walmart, and the money amounts to half the association's budget. The Foundation gave out $190 million in K-12 education grants that year, the majority of which either went to organizations with the word "charter" in their name or to privatization/"education reform" groups. There's no bigger financial supporter of charter schools in the country than the Walton family. Sigmund isn't about to anger her benefactors. Post elections, she will make it her prime mission to be sure any changes to charter regulations happens around the edges, if they happen at all.

Next comes Attorney General Mark Brnovich who, to my recollection, never mentioned charter schools until six weeks ago when he claimed he was Shocked! Shocked! to read that charter heads were making millions off of questionable deals. Out of nowhere, Brnovich became a believer in tightening the charter schools reins. Or maybe he didn't actually become a believer. Maybe he saw his Democratic challenger, January Contreras, on his heels in an election that could trend Democratic, with education as a top issue with voters.

It's not like Brnovich hadn't heard of charter school financial scandals until the recent spate of articles. They've been in the news for years. And before he was AG, Brnovich worked at the Goldwater Institute as Director of the Center for Constitutional Government. The Goldwater Institute gives the ACSA a run for its money when it comes to charter school cheerleading. Brnovich jumped on the charter school reform bandwagon out of political necessity. If he's reelected, expect him to jump back off in a hurry. He'll be too busy with more pressing issues, like the lawsuit against the Affordable Care Act he joined with 20 other AG's, to give his attention to charters.

When Doug Ducey first read about charter owners' profiteering, he thought it was just fine, the same way he thought a half percent raise for teachers, which he upped to one percent, was just fine. Then his political instincts caught up to what was going on, and his attitude changed in a hurry. He demonstrated his newfound love for teachers by giving them a ten percent pay hike, and he developed a newfound belief that charters needed reform. He said he backed a reform proposal put forward by Republican senator Kate Brophy McGee.

Brophy McGee had ample opportunity to show her support for charter school oversight and transparency while she has served in the senate. She could have supported charter reform bills sponsored by Democrats. Instead, she voted with her Republican colleagues against the Democratic measures. Why the sudden shift? This year she has a serious reelection threat in the form of Christine Marsh, who is not only an educator but a former Arizona teacher of the year. It's a good time for Brophy McGee to come out for stronger charter school governance, at least until the election is over.

And that brings us full circle, back to ACSA. Sure, Sigmund is for making changes, but she doesn't want to go as far as the reforms Brophy McGee suggests, the ones Ducey says he supports. Sigmund said she is for improved financial transparency, but stops short of what she calls "hostile regulations that will either hurt or eliminate our charter sector." She'll fight hard to make sure no "hostile regulations" make it very far in the legislature.

Here are my three guesses about what will happen with charter school oversight and transparency if the Republicans hold onto the governorship and a legislative majority. They'll do nothing. Or they'll do something but not enough to make a significant difference. Or they'll change things in a way that ends up benefitting the people in charge of charter schools instead of restraining them, then congratulate themselves for fixing the problem. And problems with charter corruption and profiteering will go on pretty much as they are.

"The Sister Brothers" Is a Dark Western with Great Performances