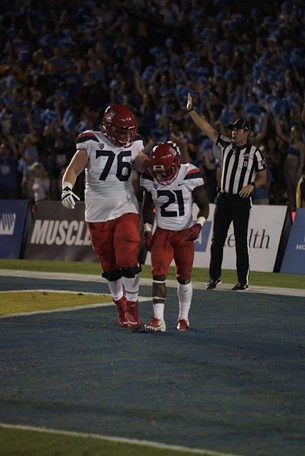 Connor Buss, Foreword Films
Offensive lineman Cody Creason, left, consoles running back JJ Taylor after he fumbled the football in the first half of Arizona's 31-30 loss to UCLA on Saturday night.
The tide of Arizona's one-point defeat to the UCLA Bruins at the Rose Bowl in Pasadena on Saturday night turned on a gallant run by running back JJ Taylor.

Taylor, who finished the night with a game-high 154 rushing yards on 19 carries, found a huge hole in the UCLA defense, racing into the void for a 55-yard gain.

It appeared to be the offensive shot in the arm that the Wildcats, who struggled for most of the first half offensively, needed.

His seeming triumph came to an abrupt end on the well-timed punch by Bruins safety Darnay Holmes, who chased Taylor down from behind to knock the ball loose and through the back of the UCLA end zone for a touchback.

The play erased a surefire seven points for Arizona, allowing the hometown Bruins to go into the half with a 17-7 lead on Kevin Sumlin's Wildcats.

Arizona (3-5, 2-3) was able to storm back in the latter half of the contest, with sophomore QB Rhett Rodriguez, who made his first career start in place of injured Khalil Tate, finding his rhythm in the pocket.

The two sides traded offensive blows in the third quarter, with Rodriguez finding senior wideout Shawn Poindexter for an 11-yard touchdown pass to tie the game at 17.

Senior kicker Josh Pollack gave the Wildcats their first lead of the night on a 39-yard field goal with 4:58 left in the third, giving them a 20-17 lead on the Bruins.

The Wildcats defense was unable to stop Michigan transfer QB Wilson Speights though, with the gunslinger connecting on a 25-yard passing touchdown to help the Bruins regain the lead.

Taylor found a bit of redemption on Arizona's next drive, scoring from the shadows of the goal-line to give the Wildcats a 27-24 lead with 12:34 left in the fourth.


The Wildcats defense, which surrendered 460 yards to the Bruins, were unable to stop UCLA on its final two drives, with the home squad scoring on a Joshua Kelley rush, before killing the clock on their final drive of the night.

Sumlin gave the Bruins credit for their ability to close out the victory, but said his side did plenty to aid in their own eventual downfall.

“I think that down the stretch you have to give UCLA credit for how they handled the tight situation in the second half, but we also did some things that allowed them to extend drives. Really some penalties that we did not have in the first half," Sumlin said. "I think we had two in the first half to their ten. Then we had four critical ones late third quarter, late fourth quarter that helped extend their drives. I think they only had two penalties in the second half. We had two turnovers in the end zone. Punch out on JJ and pick in the end zone which certainly would have translated to more than one point in the game. We had our opportunities and basically if you look at the sum of the whole game they made plays with the turnovers.”

Poindexter, who finished the night with 106 yards on six catches for the Wildcats, spoke of the sting that losing to UCLA in Pasadena left in the locker room.

“This one was just personal because I was hurt my first year and couldn’t travel to UCLA," he said. "So this is my first time in the Rose Bowl. So for me this one hurts."

The Wildcats have not beaten UCLA in Pasadena since 2010, when they beat the Bruins 29-21, having lost each of their last four contests with the Bruins in Southern California.

Rodriguez said the team's defeat at the venerable Southern California venue had nothing to do with the squad's effort.

“Effort on this team is never the question. This team always plays hard. So I wasn’t surprised. We felt good going into the game, at least I felt good into the game. I was confident that we were going to come out with a victory, but we were just one point short.”

Senior linebacker Colin Schooler, who had a team-high 10 tackles against UCLA, knows how tough it'll be for the Wildcats to spring the upset against the Ducks, especially after Mario Cristobal team's 34-20 loss to Washington State last Saturday.

The senior linebacker knows how tough the Ducks are, with his brother, Brenden, taking snaps at wide receiver for Cristobal's team this fall.

He also knows how well this year's team can play when they're all on the same page. He believes the team can do what's necessary to upset the Ducks if they can figure out how to channel the energy they had in Saturday's second half over an entire 60-minute contest.

“We just need everyone to do their job for four quarters, and as simple as that sounds it’s not," Schooler said. "The games are so fast and there are so many key factors with different responsibilities and different plays. If we can slow the game down and getting everyone doing their job at the same time, I think we’ll have a good chance.” 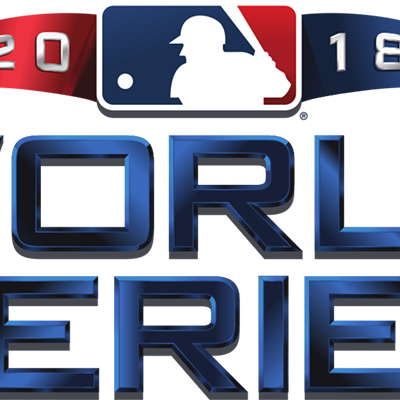 In Our City of Gastronomy, Learn About the Social Justice and Politics of Food