Three and Out: The Arizona Wildcats are heading to Los Angeles 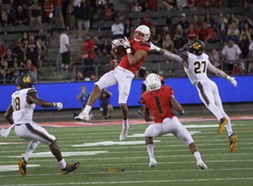 Christopher Boan
Shawn Poindexter snags an onside kick attempt in the waning seconds of Arizona's 24-17 win over Cal on Saturday, Oct. 6.
It's been a rough slog of-late for the Arizona Wildcats, who were beaten in Salt Lake City last Friday, 42-10.

The Wildcats find themselves at 3-4 for the year, with a 2-2 conference record, heading into a crucial road battle with UCLA at the Rose Bowl on Saturday night.

The Bruins (1-5, 1-2) struggled for most of the season, before crushing the Cal Golden Bears in Berkeley, 37-7, on Saturday night.

The two squads will square off in Pasadena at 7:30 p.m. local time, with the team's postseason fate resting on the result.

A quintet of Wildcats broke down the team's season and their matchup with the Bruins on Tuesday afternoon, covering a wide variety of topics.

"You don't want to underestimate anybody. It'll make you go into the game with the wrong mindset of we just attack this game like we attack every other game," Johnson said. "They're probably like real cocky right now. They destroyed Cal, we barely beat Cal. So, they probably think they got their stuff together and we suck right now so we got to come in and hit 'em in their mouth."


Both squads will look to bolster their inefficient defensive effort this season, with the Wildcats surrendering 437.9 yards per game, while the Bruins have given up 409.7 YPG this year.

Senior safety Demetrius Flannigan-Fowles, who has 20 tackles and a forced fumble this season, expressed confidence that the Wildcats can regain their confidence on defense, a week after giving up 495 yards to the Utes.

Rodriguez replaces junior Khalil Tate, who is out for this week's game with an ankle injury suffered in the first half of the team's loss to Utah.

Poindexter, who leads the Wildcats in receiving yards (446) and yards per catch (18.6), believes that the Wildcats' offense won't miss a beat with Rodriguez in charge.

"Rhett is a coach's son, so you know anytime he steps on the field he's going to do what he has to do," he said. "He brings a positive energy and you know he's going to be playing at the highest level he can possibly play. So, he kind of pulls that out of you as well."

Rodriguez, who played high school football at Catalina Foothills, has completed 26-of-45 passes this season for 275 yards and a touchdown this season.

The sophomore should receive a two-headed boost in the backfield, as JJ Taylor and Gary Brightwell will both be healthy for this week's game.

The pair of running backs have combined to gain 985 yards and 5 touchdowns this year, giving Kevin Sumlin's team a strong rushing attack for the final stretch of the regular season.

Brightwell, who has 322 yards and two touchdowns this season, discussed the pair's relationship by referencing the pop culture phenomenon known as Fortnite (the uber-popular video game).

"JJ [Taylor] is very motivational. So, he just stays on us. I stay on him, he stays on all of us," Brightwell said. "Alright for example, we played a game together, and we play a game called Fortnite. If I die, he won't worry about going to kill the rest of the guys, he'll come get me right on the spot. So, he's a team player for sure."

How to Watch: The Wildcats and Bruins square off on ESPN2 at 7:30 p.m. local time.

How to Bet: Vegas currently has the Bruins as an 8-point favorite to win. The over/under for the game is 56, as of Wednesday afternoon.

Who to Watch: The Bruins are led offensively by freshman QB Dorian Thompson-Robinson, who has 1,073 passing yards and 5 passing touchdowns this season. Junior running back Joshua Kelley leads the team in rushing yards (433) with four rushing touchdowns for the Bruins.

Score Prediction: This will be a game that you're probably going to want to avoid, given how sloppy each team has been season. That said, I think the Wildcats will do just enough under RhettRod to win this one, so I'll go with Arizona over UCLA, 38-35.