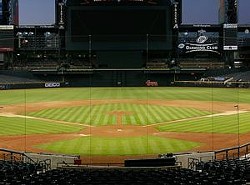 Courtesy
Chase Field
The Arizona Diamondbacks will strip Chase Field of its grass playing surface and replace it with synthetic turf, according to an article in Friday's Arizona Republic.

The stadium, which opened alongside the team's inaugural season in 1998, will feature high-performance B1K synthetic grass, the article said.

The synthetic playing surface is supposed to replicate the effects of natural grass, limiting any learning curves for players next spring.

The team evidently made the change to cut back on the stadium's water use, with environmentally friendly materials being used for its infill.

The move will also allow the team to leave the stadium's roof closed more often on game days, which will cut back on the amount of air conditioning that the 20-year-old facility requires.

According to the Republic's article, the move is expected to give the team a  90 percent savings in water usage, or nearly 2 million gallons of water, thanks to not having to water and maintain the grass each day.

The surface, which is designed by Shaw Sports Turf, will be added to several of the playing fields at the team's spring training facility, Salt River Fields in Scottsdale, in time for next year's schedule.

Claytoon of the Day: Kanye Blows

Nothing about rape is RAD, unless we are talking about the Rape Aggression Defense course offered by the Pima County Sheriff's Department