Welcome to another week of action-packed college football in the land of In-N-Out and bad officiating, better known as the Pac-12.

We were treated to several tantalizing contests last Saturday, with Arizona's defense saving the day against Cal, while Colorado outlasted ASU in Boulder and Washington and Washington State survived stiff challenges by conference lightweights, UCLA and Oregon State.

The Stanford Cardinal's midseason collapse continued, losing at home by 19 points to Utah, capping off the week's on-field action.

This week presents a new slate of challenging contests, starting with Arizona and Utah's clash in the SLC at 7 p.m. on Friday night.

That game, which pits a 3-3 Wildcats squad with little offensive rhythm against an inconsistent Utes squad that's looked equal parts fascinating and frustrating through five weeks, should be a fun contest to keep an eye on as you hit the bars with your mates, with ESPN broadcasting the game.

Then there's the always fascinating showdown that is USC (3-2, 2-1) against an undefeated Colorado squad that beat ASU, 28-21 last Saturday.

The Buffs and Trojans meet in LA at 7:30 p.m. Pacific time on Saturday night, with Fox Sports 1 broadcasting the clash nationwide.

The only other conference game on Saturday is one you'll likely want to miss, with a winless UCLA squad taking on Cal in Berkeley. That game is scheduled to kick off at 4 p.m. Pacific, with the Pac-12 Network carrying the contest.

Without further ado, here's how I see the Pac-12 shaking out from top-to-bottom through seven weeks of action:

The Huskies and Ducks are a virtual-tie on top of the conference. Lucky for all of us, the two sides face off at Oregon on Saturday afternoon, meaning we'll soon have closure on who's the better team. I'm impressed with how well the Huskies have handled their business this season, after losing a gut-punch of a game to Auburn in their season opener. Chris Petersen's team hasn't been sexy on offense, with senior QB Jake Browning averaging 251.3 passing yards per game, with 9 touchdown passes to 5 interceptions this season. Longtime backfield workhorse Myles Gaskin has been even more pedestrian, with 554 rushing yards and 5 scores for the Huskies in six games. The Huskies have made up for their rather feckless offensive with a defense that gives opposing quarterbacks nightmares, giving up the fewest points (13.7) and second-fewest yards per game (304.5) in the Pac-12, while sitting atop the conference with ASU in sacks, with 18 of them in six contests. The Huskies will give Oregon's Heisman Trophy candidate quarterback, Justin Herbert, all he can handle on Saturday afternoon. Get your popcorn ready.

The Ducks have hit the ground running under first-year coach Mario Cristobal, who assumed the head coaching role after former coach Willie Taggart ran to Tallahassee in the offseason. The Ducks, thanks to the exploits of the aforementioned Herbert, who ranks third in the conference in passing yards per game (282.2) and second in touchdown passes (15). Herbert has thrown his 15 touchdowns to seven different receivers, which exemplifies the team's depth at the wide receiver, running back and tight end positions. Junior wideout Dillon Mitchell has been phenomenal, ranking fourth in the Pac-12 in receiving YPG (88.4) this year, with two touchdowns catches for the Ducks. The Ducks' offensive balance is much better than in years past, ranking fourth in the conference in rushing yards (1,080) and eighth overall in passing yards (1,438), with a conference-best 503.6 YPG for the year. The Ducks' unstoppable tour de force offense against the Huskies' top-notch defense is going to be must-see television. Luckily for us, the game is on a national TV (and not the conference's network), so you'll actually get to watch the game live.

I'm probably higher on the Buffs (bad weed pun intended) than most. I watched most of the team's 28-21 win over Herm Edwards' ASU squad in Boulder last Saturday, and couldn't get over how great sophomore wideout Laviska Shenault Jr. is. Shenault absolutely torched the Devils, with a year-best 13 catches for 127 yards and two touchdowns. He also, for good measure, added 13 rushing yards and two scores on the ground for the Buffs, accounting for all four of their offensive scores (!). Shenault and junior QB Steven Montez obviously have a rock-solid connection in the passing game, giving Colorado its best QB-WR tandem since the days when Michael Westbrook roamed the field with Cordell Stewart in the late 1980s and early 1990s. It's an exciting time to huddle around the bandbox stadium tucked inside the picturesque campus of CU Boulder—which, as a CSU alum, kills me to admit.

The Cardinal probably don't deserve to be placed in the top-half of this list, after their god-awful performance at home against Utah on Saturday. The Cardinal have gone from the penthouse to the outhouse in two weeks, after getting boat-raced by Notre Dame (in South Bend) and the Utes at home in consecutive weeks. I, however, believe that most of the team's recent struggles stem from 2017 Heisman finalist Bryce Love's laundry list of injuries, combined with KJ Costello's on-field stupidity. I never rule out Cardinal coach David Shaw, who is one of the brightest offensive minds in the sport, and believe the team will get healthy during their bye week and look like a new team when they travel to Tempe to face ASU on Oct. 18.

There's no more enigmatic team in America than Clay Helton's USC Trojans squad this season. The Men of Troy have looked even more inconsistent than usual this fall, looking downright incompetent in back-to-back losses to Stanford and Texas—who savagely beat them by combined score of 54-17—before storming back to prominence with a prototypical #Pac12AfterDark performance in LA against Washington State, who they beat in the game's waning minutes, 39-36. The Trojans then reverted back to their former selves against the Arizona Wildcats the following Saturday, somehow winning the game, 24-20, despite committing 18 penalties in the contest (the most a USC team had committed in a game since the awful Paul Hackett year of 2001). The Trojans host Colorado on Saturday night in a game that will likely determine which team will qualify for, and subsequently get its ass kicked, by whichever team wins in Eugene on Saturday. Good luck predicting whether Good USC or Downright Ugly USC will make an appearance under the lights of the "United Airlines" LA Coliseum on Saturday night.

The Cougars are just as pass-happy and allergic to playing defense as any that Mike Leach has coached on the Palouse, and frankly, god bless 'em for it. Wazzu has stunned the conference so far, with East Carolina University transfer QB Gardner Minshew IV leading the squad to a 5-1 record, with a three-point, crazy bananas loss in LA separating them from being undefeated at the halfway point of the season. The Cougars have reached their bye week at the perfect time, giving Leach an extra seven days to prepare for Oregon, who come to Martin Stadium on Oct. 20. Don't be surprised if the Cougars finally crack the AP top-25 when they take the field for that much-anticipated contest.

The Herm Edwards Experience has been just as strange and entertaining as we all expected, despite ASU still meddling its way through the Pac-12 schedule. The Sun Devils aren't loaded with talent, save for senior QB Manny Wilkins and wideout N'Keal Harry—who have connected 34 times for 481 yards and five touchdowns this season. The duo have been fun to watch, but can't do it all themselves. Unfortunately for both, ASU's defense is still quite mediocre, ranking in the bottom-half of the conference in yards per game allowed (385.0), pass yards allowed (222.7), rushing yards allowed (162.3) and turnovers forced (7). The Devils get a week off to prepare, ahead of their home clash with Stanford at 6 p.m. local time on Thursday, Oct. 18.

The Utes pulled of their once-a-year October surprise on Saturday, when they shellacked Stanford, 40-21, in Palo Alto. The Utes found their groove on the ground against the Cardinal, with 222 yards on 43 carries in the win, with back Zack Moss gaining 160 yards and two touchdowns to pace the offense. Quarterback Tyler Huntley was efficient in the game, completing 17-of-21 passes for 199 yards and a touchdown. More importantly, he did not throw an interception, which allowed the Utes to dominate time of possession, which gave them the upper-hand in constricting the Cardinal's offense. They'll have to do much the same against an Arizona defense that's looked shockingly-sturdy this season. Friday night games are notoriously crazy, and this week's installment should be much the same.

The Wildcats' defense has held its first three conference foes (Oregon State, USC and Cal) to 24 points or less, becoming the first 'Cats defense to do so since 2010. They also scored multiple defensive touchdowns in last Saturday's 24-17 over Cal for the first time since 2015, speaking to the meteoric rise of a cadre of fresh-faced players that dot key positions on defense. The effort turned in by sophomore linebacker Colin Schooler, who had 9 tackles and an interception on Saturday—as well as fellow underclassmen in the secondary like Scottie Young Jr., paint a bright future for Kevin Sumlin's squad. The Wildcats will look to snap their three-game losing streak to Utah this week, after losing last year, 30-24, on a Friday night in Tucson to the same squad. It'll be interesting to see if the team's offense, which has looked rather anemic, can gain enough yards on the ground to open up passing opportunities for QB Khalil Tate, or if the team will revert back to their turnover-prone ways.

Cal looked awful in their 24-17 loss to Arizona, aside from QB Brandon McIlwain's two long rushing scores. McIlwain himself caused much of the consternation, spotting Arizona 14 points on two passes that were intercepted and eventually returned for touchdowns. Lucky for Justin Wilcox's team, winless UCLA is next on the schedule, which should give them a head of confidence going into the heart of their conference schedule.

Chip Kelly's team is awful, and I honestly have zero idea how they only lost by seven points at home to Washington last week. They'll beat someone at some point, perhaps on Saturday night in Berkeley. Until then, it's rough sledding for Kelly and his players in year one of what's likely to be a multi-year rebuild in Westwood.

God bless Jonathan Smith and company in Corvallis. They're trying, but they also are handed the toughest division in college football, expect maybe the SEC West. The Beavers were fortunate enough to taste victory once this season, beating the stuffing out of FCS squad Southern Utah. They likely won't earn another win until next fall at the earliest, but bless them all for busting their hump each and every day in practice.

Learn How To Juggle at Tucson Meet Yourself 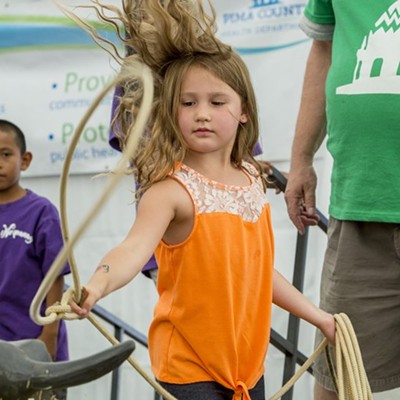