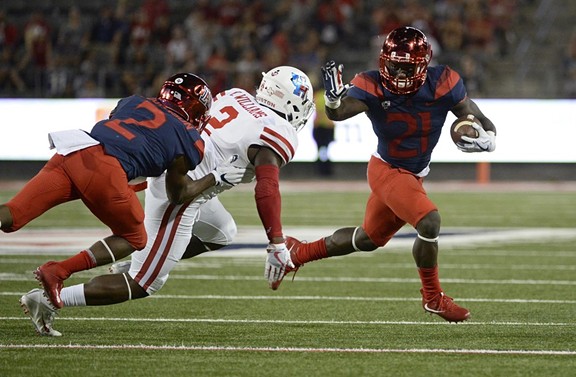 Arizona Athletics
Arizona running back JJ Taylor tries to outrun University of Houston safety Khalil Williams during last year's 19-16 victory by the Cougars in Tucson.
A quartet of Arizona football players took turns spitting out idioms and soundbites at the team's weekly media availability within the glass walls of the Lowell-Stevens Football complex on Tuesday afternoon.

Johnson discussed everything from his bright gold "grills," or gold plates that surround his actual teeth, to more pressing football-related topics, like the defensive line's progress in consecutive wins over Southern Utah and Oregon State.

Fields addressed the linebacking corp's improvements, the progress of fellow sophomore Colin Schooler and where the team is as we near the midway point of the year.

Poindexter, the elder statesman of the group, discussed quarterback Khalil Tate's maturation under center and his ability to use his height and speed to his advantage.

The thread that brought the four Wildcats together was their take on this week's home game against divisional foe, Southern California.

The mighty Trojans of USC are 2-2 this season, the same as the Wildcats, but enter Saturday's 7:30 p.m. clash with the added bonus of having won five straight over Arizona.

The Trojans have dominated Arizona through the years, with a 33-8 lead in the all-time series, with 13 wins in 17 trips to Arizona Stadium.

The ensemble of Arizona players weren't shy in their prognostications about this week's contests, however, expressing confidence in their ability to thwart the Trojans.

Johnson was the first to take to the stage, describing the visiting squad in rather ho-hum fashion.

"I feel like if we take the game as more than just a game that it’ll get over our heads," Johnson said. "So, we’ve just got to treat them the same way we would any other team."

The Wildcats will look to improve upon their last meeting with USC, a year after the Trojans cruised past them, 49-35 in LA to snap the team's four-game win streak.

That loss set in motion a year-end tailspin for Arizona, with the Wildcats losing three of their last four games to end the season.

The Trojans success against Arizona a year ago came largely because of their ability to fluster quarterback Khalil Tate, holding him to 146 passing yards, and a year-low 45.2 percent completion percentage.

Tate did cut up the Trojans on the ground last year, with 161 yards and a touchdown on 26 carries in the loss.

Poindexter, who was held to one catch and 11 yards in last year's contest, believes this year's game will be different, that it provides the Wildcats a shot at making a statement to the rest of the conference.

"I think [winning] would be huge," Poindexter said. "I think we made a good statement win against Oregon State. I think that should speak volumes for itself ... I think beating USC would really establish us and maybe the city will believe in us a little bit more."

Fields, who had a team-high 11 tackles in last year's contest, knows that much has changed in the 11 months since the two teams last met.

The Las Vegas native said the team's defense is prepared to go against USC's freshman quarterback, JT Daniels, a week after the 18-year-old led a come-from-behind win against Washington State.

Fields believes the unit can pounce on Daniels' youth and inexperience this week, forcing him into making bad decisions.

He also believes that a win against the Trojans could be a statement for the team as a whole, as well as first-year coach Kevin Sumlin.

"It'd be a great boost. Not just for the program, but for our fans too," Fields said. "I believe our fans would be all here, they'll be all in. A couple days ago I posted something on Twitter, we need the fans to be here completely out ready to roll."

Sumlin addressed Saturday's contest and what a win would mean to him and his players in his weekly press conference on Monday.

He believes that his team is in fine form on both sides of the ball right now, but knows that the Trojans will test their newfound mettle.

"We’ll see this week because USC is a very talented team, they’ve had their struggles, but they still have a lot of talent across the board," Sumlin said. "They've got a young quarterback (JT Daniels) but he’s talented, a veteran offensive line in front of him, explosive on the perimeter.”

Poindexter summed up the team's viewpoint heading into Saturday's game, describing the contest with a hint of revenge in his voice.

"We want to go into the game and we want to win. We don't just want to win, we want to blow them out," Poindexter said. "We're just going to continue to work every single day and hope for the best on Saturday."

How to Watch: Arizona and USC will kick off at 7:30 p.m. Arizona time on Saturday, with ESPN2 carrying the contest.

Who to Watch: USC is loaded with young offensive talent, including freshman QB JT Daniels, who has 1,060 passing yards and four touchdowns this year. Another name to keep an eye on is freshman receiver Amon-Ra St. Brown, who leads the Trojans in receiving yards (342) with 2 touchdowns and 20 receptions this season.

How to Bet: USC is currently a 3.5-point favorite, as of Wednesday morning. The over/under for the contest is at 61. 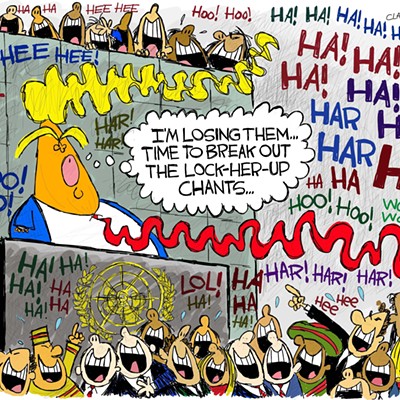 Claytoon of the Day: International Laughingstock