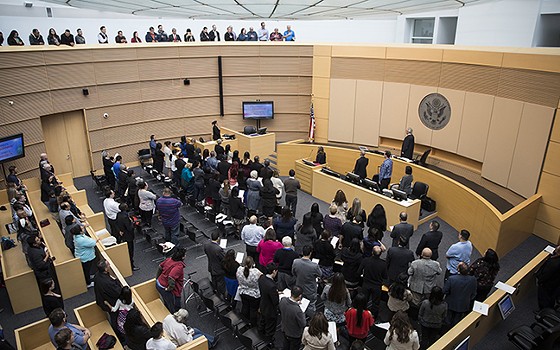 Johanna Huckeba, Cronkite News
New citizens attend a swearing-in ceremony in February 2017.
Millions of immigrant families who use public federal assistance could find it harder to obtain permanent residence status under new rules being proposed by the Trump administration.

On Saturday, the Department of Homeland Security proposed to limit access to green cards for immigrants who use or qualify for public assistance. According to DHS, these changes would be a way to ensure legal immigrants can financially support themselves when they enter the U.S.

“This proposed rule will implement a law passed by Congress to promote immigrant self-sufficiency and protect finite resources by ensuring that they are not likely to become burdens on American taxpayers,” DHS Secretary Kirstjen Nielsen said.

The proposed new policy targets foreigners who use public benefits – also known as “public charges” – who may be processing their permanent residency. “Public charge” is a term used by the Trump administration to identify anyone who uses public benefits, including nutritional support commonly called food stamps, Medicaid and public housing.

This proposal is aimed at those who are in the process of applying for their green card, not those who already possess one.

Any person who received benefits of more than 15 percent of federal poverty guidelines for a one-person household during 12 consecutive months would be classified as “public charge.” In 2016, that amount equaled $1,821.

Abril Gallardo Cervera works closely with families who receive assistance through LUCHA, a pro-immigrant advocacy group in Phoenix. Despite the potential changes, Cervera said it’s important for those families to continue applying for residency, even if they are using public benefits and to consult an immigration attorney in case of doubts.

“They want people to be scared and not continue with that process,” she said.

According to a June study by the Migration Policy Institute, a Washington think tank, roughly 27 million people with at least one family member who receives public support from the government could be impacted by these new proposals. The report also says it can cause a chilling effect and defer immigrants from applying for green cards due to the risk of deportation or disqualification.

However, Phoenix immigration lawyer Rafael Tirado advises those seeking public benefits to refrain from applying, given the proposal released Saturday, until further notice.

“They are basically increasing the definition of public charge and those who are going to be most affected are those immigrant families who live under the poverty guidelines,” Tirado said.

As it stands, there will be a period of 60 days where the public has the opportunity to comment on the proposal. This leaves at least two months of uncertainty for an applicant regarding the safety of requesting assistance.

“Consult a lawyer to see if that’s good for you,” Tirado said about inquiries immigrants might have about the use of public benefits.

“This is a larger conversation about the immigrant community being attacked by this administration directly,” Cervera added. “We’re talking to people at their door’s about why it’s important to continue their processes.”

The administration is expected to formally publish the draft rule Monday in the federal register. That will open a 60 day period for public comment, which the administration will review and revise. The final version would come out in a matter of months and will go into effect 60 days after it’s published.

According to Cervera, these new rules put immigrant families at odds between choosing services they need or a pathway for legal residency and ultimately citizenship.

“They’re giving them an option to get something they need to survive and choosing a process that they need, also, to survive.”

Pac-12 Power Rankings: Stanford Stands Atop the Conference of Champions