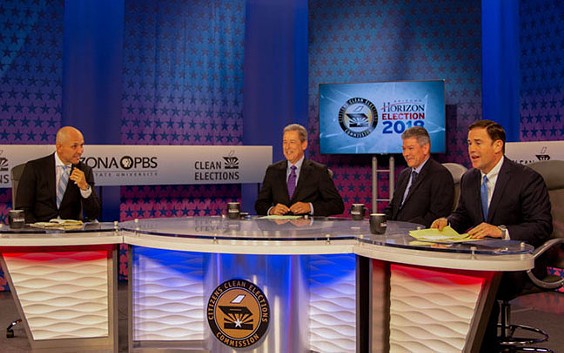 The debate, sponsored by the Citizens Clean Elections Commission and moderated by “Horizon” host Ted Simons, featured frequent back and forth and the two candidates talking over one another. Green Party candidate Angel Torres also was part of the debate but often was overshadowed by the main-party candidates.

Garcia opened by saying Arizona’s education system is in crisis. The Arizona State University educator brought up the Red for Ed movement, blaming Ducey for the walkout of thousands of teachers last spring, highlighted by a large protest at the state Capitol in April. Garcia noted Arizona ranks near the last among states in education and said teachers still are not receiving what they demand.

“The key area that we need to develop is education, specifically,” Garcia said. “A change in education is Arizona’s number one issue. It is my strength, it is Ducey’s weakness, and it’s going to be the difference.”

Ducey was quick to respond, speaking before Simons finished his question.

“I will be held accountable for the last three plus years for Arizona education, not for the past 20 years,” Ducey said.

Following the six-day #RedForEd walkout, Ducey announced he would provide a 20 percent teacher pay increase by 2020 and $371 million in additional funding over the next five years.

Ducey mentioned his 20 by 20 plan but agreed there’s more to do. Ducey said Arizona teachers are already receiving a portion of the promised 20 percent.

Across the state, however, the pay raises have varied greatly by school district, according to azcentral.com.

Ducey criticized Garcia, saying the Democrat didn’t want to talk about his plan to fund education, which he said would double income taxes.

In response, Garcia said that was his plan but it’s no longer on the ballot; the Invest in Education initiative was removed by the Arizona Supreme Court. Garcia said he intends to present a new plan to the Legislature. He accused Ducey of being a follower, not a leader.

Ducey responded by asking viewers to go to FactcheckGarcia.com because Garcia “is deceiving.”

Immigration and border control were other hot topics.

Garcia said we need an immigration system that works, one that includes border security, lawful entry for those eligible to enter the United States and provides a place of refuge. He also said Arizona highways need to be patrolled 24/7.

Ducey responded by saying that Garcia’s team has attacked efforts to control the border, and that the Democrat wants to abolish Immigration and Customs Enforcement (ICE). He also touted the Arizona Border Strike Force, which he said is keeping drugs out of Arizona.

Garcia said he wants ICE to be reformed.

Torres said it’s important that Mexican and Central American economies are strengthened and free of poverty to prevent illegal immigrants from entering Arizona.

In their finishing statements, Ducey and Garcia once again brought up education. Ducey said he hoped viewers could see the dramatic differences between him and his opponent. Garcia concluded saying there would never be another governor more devoted to public schools.

Ducey, Garcia and Torres will debate again Tuesday night in Tucson. The general election is Nov. 6.