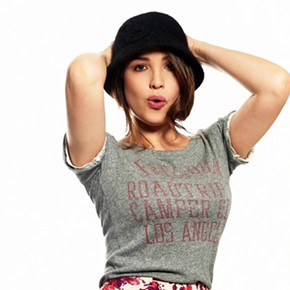 facebook.com/luz.pazos
Luz Pazos headlines at The Mint Cocktails Tuesday, Sept. 25.
Laughing Stock is slacking again next week, but the laughter never ends. Laff’s Comedy Caffe is always a good call, and tucsoncomedy.com has everything else. Our picks follow.
How did we get this show for free?

Pazos is a Peruvian egghead from Los Angeles via Italy who apparently got bored being a fashion model. She’s won more than her share of comedy contests in L.A., and has played the Comedy Store, Improv and Laugh Factory as well as festivals in Toronto, Asheville and Portland. Soon we’ll see her in the First Nations of Comedy on PBS.

Cunts Being Cunts Talking About Cunts returns at 9 p.m., Friday, Sept. 28 at CANS DELI; $5. Organizers say they originated the show to give cunts the respect they deserve.
Now in its second year, the quarterly event benefits the YWCA’s Project Period, which provides free sanitary products as needed. The band Cool Funeral performs following the comedy line-up, including hosts Mo Urban and Steena Salido, Phoenix comedian Sloan Valenzuela, and award-winning storyteller Molly McCloy, among others, including moi.

Titters says it all.

Tucson cartoonist David Fitzsimmons’ presents Thanks for the Mammaries: The Estrogen Hour’s finest Hour at 8 p.m., Wednesday, Oct. 3, at Laff’s Comedy Caffe. Tickets are $15 via freshtix.com/events/titters. The show is 21 and older.

This is the second show Fitzsimmons has produced to raise money for Making Strides Against Breast Cancer, an event organized by the American Cancer Society. Fitzsimmons lost his mother and sister to breast cancer.