Les Miserables. Do you hear the people sing? Oh, you will. And the people will hear you sing too because you’re going to have “Look Down” and “On My Own” stuck in your head for probably the rest of your life. This story of the peasant Jean Valjean and his journey to redemption, Eponine’s unrequited love and Javert truly harshing everyone’s vibes is set amid the 18th-century French Revolution and is the second longest-running musical in the world (after the Fantasticks). It’s a theatrical experience that’s always riveting, and a production of the show just finished an acclaimed two-and-a-half-year run on Broadway, so it’s not to be missed when Broadway in Tucson kicks off its fall season. Tuesday, Sept. 4 to Sunday, Sept. 9. 7:30 p.m. Tuesday through Thursday, 8 p.m. Friday, 2 and 8 p.m. Saturday, and 1 and 6:30 p.m. Sunday. Centennial Hall, 1020 E. University Blvd. $19 to $160. Details here.

93 Queen. The Loft Cinema invites you to get an inside look at the first all-female volunteer ambulance corps in New York City. 93Queen follows a group of Hasidic women who are “smashing the patriarchy” in their community. Supported by community partners Hadassah Southern Arizona. 7:30 p.m. Tuesday, Sept. 4. 3233 E. Speedway Blvd. Regular admission prices. Details here.

Invisible Theater
Goldfishing at the Last Resort. Our friends over at the Last Resort, a local nonprofit animal rescue, have a pond full of goldfish—too much goldfish, in fact. So they’re offering up this opportunity to local kids to come catch as many of the baby goldfish as they want (they’re so young, they’re not even gold yet). They’ll provide nets, but visitors should bring their own containers to transport the fish home in. They’re charging just 10 cents a fish. While you’re on the small property, you’ll also see some cats and bunnies—after all, it’s an animal rescue. Due to the small staff’s busy schedule and a need to rein in some sometimes overly friendly dogs, call ahead to make an appointment. Organization president Louise Chernetz can be reached at 792-9290. 923 N. Anita Ave. Details here.

The Absolute Brightness of Leonard Pelkey. The Invisible Theatre is kicking off its 2018-2019 season with the Arizona premiere of this play by James Lecesne. You could call it a one-man show but only in a sense: There’s one actor portraying every character in a small Jersey Shore town. The plot concerns the disappearance of 14-year-old Leonard Pelkey, a tenacious and flamboyant force of nature who drives home for the whole town the lesson that you don’t know what you have until it’s gone. As the search goes on, the town’s residents find themselves questioning what means the most to them and what they leave behind. Tuesday, Sept. 4 through Sunday, Sept. 16 with showtimes at 3 and 7:30 p.m., depending on the day. The Invisible Theatre, 1400 N. First Ave. $35 GA Details here.

Claytoon of the Day: Enemy of the People 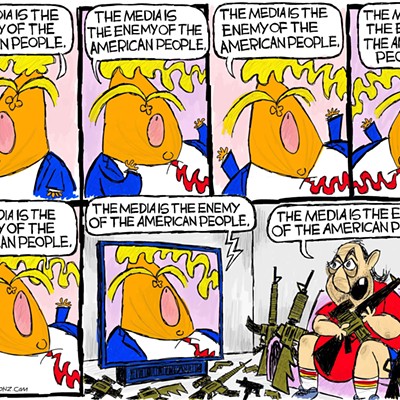