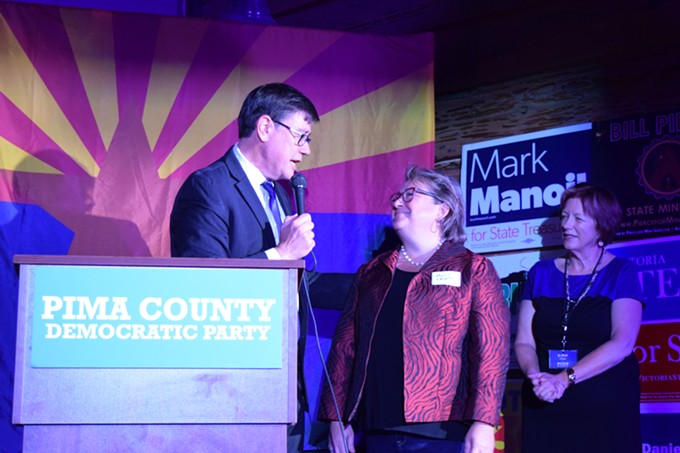 Danyelle Khmara
Gubernatorial candidate Steve Farley calls for unity as one of his primary opponents Kelly Fryer takes the stage with him.

An hour before the numbers started to come in for the governor's race, Steve Farley said he’s proud of all the work his volunteers did with his campaign, truly showing the voters who he is as a candidate. He says hundred of teachers joined his campaign after they saw him on the House floor, pushing for an increase to education funding during the Red for Ed teacher walkouts.


He said he’s shown he can win elections, with his numerous terms in the Arizona Legislature, and that experience has prepared him to be governor, and he can solve the problems caused by Doug Ducey’s governorship.


He took the stage at the Pima County Democratic Party’s election event and asked his opponent Kelly Fryer to join him the stage.


“Let’s go out and change this together, no matter who wins tonight,” he said

Kirkpatrick Leads Dem Pack in CD2; Marquez Peterson Is Leading the GOP Side